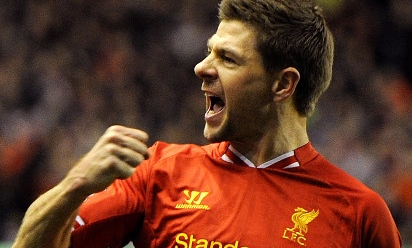 Liverpool reclaimed second position in the Barclays Premier League and closed the gap to leaders Chelsea to a single point with a 2-1 victory over Sunderland at Anfield on Wednesday night.

Steven Gerrard broke through the away side's stubbornness via an outstanding set-piece with moments remaining in the first half, then Daniel Sturridge doubled the advantage minutes after the restart with the help of a deflection.

Substitute Ki Sung-Yeung capitalised on too much space from a corner to the back post on 76 minutes to set up a nervy finale, but the hosts warded off the threat of a damaging equaliser to take the three points.

When teamsheets were handed in to the referee, the one bearing Liverpool's name confirmed that Brendan Rodgers had selected exactly the same starting XI and substitutes as the group that racked up a 6-3 victory over Cardiff City last weekend.

Glen Johnson and Philippe Coutinho both crashed long-range efforts high over the crossbar during the opening exchanges, before fans waited in expectancy as Luis Suarez braced over an inviting free-kick from 20 yards - but the ball travelled narrowly over the crossbar.

Next it was Sturridge's turn to train his sights from distance - off target from the right corner of the Sunderland area - and the No.15 was then unfortunate not to successfully redirect an outside-of-the-boot cross from his strike partner at the far post.

The Reds were dominating possession but finding the visitors difficult to break down, which prompted Joe Allen to unleash a drive after completing a one-two with Suarez, but that too was no danger to Vito Mannone between the posts.

Attempting to take matters into his own hands, the Reds' top scorer set off on a lengthy dribble which concluded with a left-footed punt shortly after the half-hour, but once again there was little to concern the Sunderland goalkeeper.

The home fans were in uproar when Santiago Vergini was shown merely a yellow card when he hauled down Suarez as he bore down on goal, but their annoyance quickly turned to joy when Gerrard stepped up to curl over the wall and past Mannone in the 39th minute.

Sunderland responded strongly and Simon Mignolet was at full stretch to push away a deflected hit by Connor Wickham from outside the penalty box, to ensure that Rodgers' charges preserved their slender advantage heading into half-time.

A mere three minutes of the second period had passed before the Reds had a cushion, however; Jordan Henderson fed Sturridge in the right channel and the Englishman let fly with an effort that clipped off Wes Brown and nestled into the corner for 2-0 and his 20th league goal of the campaign.

The Reds lacked the necessary luck to rapidly extend their lead when Sturridge shaped to produce a carbon copy finish and actually fired into Suarez, who took control but was shepherded away by Mannone at close range.

Breath was baited when Gerrard drilled a glorious pass to the Uruguayan on the left wing and he bulldozed inside, but the Premier League trail-blazer whipped a ferocious attempt a shade wide of the far post.

Mannone thwarted Coutinho as the tricky Brazilian bounced a pass off Suarez and collected the return, before the Black Cats' stopper comfortably claimed a looping Sturridge header from the No.10's accurate corner.

Gus Poyet's outfit served a warning with 70 minutes on the clock, as Andrea Dossena's lofted pull-back from the left side arrived at Lee Cattermole - the midfielder whacked a volley which thundered off the crossbar.

The same part of the woodwork was instantly wobbling at the other end of the pitch; a delivery across the 18-yard line seemed ideal for Sturridge to potentially grab a second, but his side-footer bounced away to safety for Sunderland.

As the game entered its final quarter-hour, the travellers secured a lifeline. An inswinging corner carried past everybody in the box and found Ki, who made no mistake by stooping low to head into a gaping net.

With momentum behind them, the Wearsiders were relentless in their search for a leveller; the Reds held firm, though, and could celebrate a seventh successive Premier League win when the final whistle was blown.