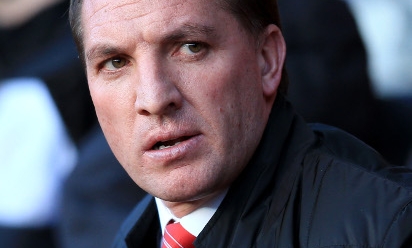 How Gerrard passed Cardiff off the park

Brendan Rodgers has issued a rallying cry to Liverpool supporters, urging them to pack into Anfield early and generate a raucous atmosphere on the Reds' return to their home ground on Wednesday night.

The last time his team played in front of the Kop was February 23, when a tense clash against Swansea City was edged 4-3 by the hosts thanks to Jordan Henderson's late winner.

Since that date, Rodgers' men have travelled across the land, turning in the sort of displays that have left spectators breathless and propelled Liverpool to second place in the table.

First Southampton were downed 3-0, before the same scoreline stunned rivals Manchester United at Old Trafford. On Saturday, it was Cardiff City's turn, as the Reds ran-out 6-3 winners.

Sunderland provide the opposition on Wednesday under the floodlights in L4 - and Rodgers insists he cannot wait to send his players out in front of a home audience once again.

"We're really looking forward to playing at Anfield now on Wednesday night," Rodgers told Liverpoolfc.com. "It's a big game for us.

"Hopefully the supporters can really get behind the team well before kick-off, get the atmosphere revved up for the game and we'll look to continue on this great run. As you can see, we believe we can perform well and get results.

"Cardiff was the fourth away game on the spin that we've won and we've played three games on the bounce away from home - Southampton, Manchester United and now at Cardiff.

While Luis Suarez took his tally for the season to 28, levelling Robbie Fowler's club Premier League record in the process, Daniel Sturridge added his name to the score-sheet after hurtling half the length of the pitch to connect with the Uruguayan's cross.

Martin Skrtel showed all the poise and instinct of a No.9 as he turned home two perfectly placed Philippe Coutinho passes to notch his fifth and sixth goals of the current campaign.

Rodgers said: "Martin was being marked by a really good, young defender in Steven Caulker. I think his first one was a great goal. He's read the situation and got across his marker and got a good foot onto it to finish it well.

"Then, with his second one, we've seen that a lot from Martin throughout his career. He makes the run, loses his marker and it's a wonderful header into the corner. He was outstanding.

"Luis gets his three goals. He's always a threat, twisting and turning in the box.

"For Sturridge's goal, I think firstly you have to congratulate Glen Johnson, because he showed great strength before hitting a wonderful, technical pass to Luis. Then, if you look at the ground Sturridge makes up, it shows that determination in the team to get a goal.

"It was a great performance in terms of our offensive game. Of course there are one or two areas that we'll look at to improve, but we did that at half-time."