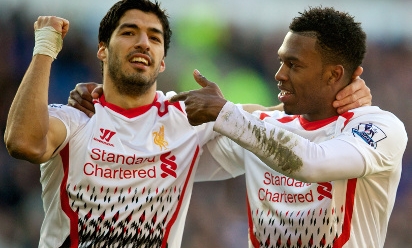 Coutinho and Sterling switch for Cardiff

Luis Suarez struck a hat-trick and Martin Skrtel notched twice to help Liverpool recover from two deficits and maintain their Barclays Premier League pursuit with a 6-3 victory over Cardiff City on Saturday.

After watching Chelsea comprehensively beat Arsenal 6-0 in an earlier battle between two of the Reds' rivals, Brendan Rodgers' charges showed their own mettle by overturning their hosts on two occasions.

A whistling Jordan Mutch effort handed the home side a lead, which was quickly cancelled out by Suarez's 26th goal of the campaign, before Skrtel equalised Fraizer Campbell's conversion for the Welsh outfit.

The Slovakian edged Liverpool in front for the first time by connecting with another Philippe Coutinho assist, then Suarez and Daniel Sturridge took turns to create a goal for the other as the Reds rapidly racked up five at the Cardiff City Stadium.

Mutch grabbed a personal second of the match by capitalising on a knockdown by substitute Kenwyne Jones, but it was purely consolation for Ole Gunnar Solskjaer's team, as Suarez bagged a hat-trick for himself in the final action of the fixture.

Before the action kicked off, the news was announced that Rodgers had opted for one change to his line-up, with Coutinho returning in place of Raheem Sterling after the duo had swapped at Old Trafford last weekend.

The opening chance of the encounter fell to Cardiff but Kevin Theophile-Catherine, who was picked out by Campbell's centre following a corner delivered to the back post, could only blast high over Simon Mignolet's crossbar in the fourth minute.

To say the Bluebirds flew out of the blocks would be an understatement - with their direct and quick attacking troubling the visitors - and their lightning tempo from the first whistle was rewarded with a goal on nine minutes.

Possession was surrendered in the left-back position and Campbell capitalised; again the forward looked to pick out a teammate with a pull-back, and Mutch was lethal in taking control and rifling a low finish into the corner with Mignolet helpless.

Within seven minutes, though, the Reds were level. A purposeful period of passing concluded with Jordan Henderson dissecting the home defence with a through ball to Glen Johnson on the right flank and the No.2's low cross was easily tapped home at the near post by Suarez.

This game was more akin to a basketball match during the opening 25 minutes and Liverpool fell behind again midway through the half - Campbell drifted inside at great speed from the right flank, bounded into the penalty box and directed a precise hit beneath Mignolet for 2-1.

As the travellers searched for an instant response, Coutinho sliced well wide from distance and Suarez trained his sights from a promising free-kick position but struck the wall with his side-foot towards the goal.

Sturridge worried David Marshall when he carried the ball to the left edge of the Bluebirds' area and clipped a strike which deflected off a defender and looped dangerously into the air - but the goalkeeper claimed with a stretch above his head.

A second equaliser arrived with five minutes remaining in the half. When a Liverpool corner was cleared to Coutinho, the Brazilian whipped a sublime delivery into the area for Skrtel to redirect past Marshall and bring the Reds level once more.

Rodgers' side might have entered the break with an advantage if it had not been for Marshall, who scurried from his goalline to thwart Suarez from close range after the Uruguayan had successfully completed a one-two with Johnson.

The second half was just nine minutes old, however, when the away team secured a lead for the first time, with the same combination - Coutinho to Skrtel - allowing the latter to glance a perfect header into the side-netting from a corner on the right.

And on the hour, it was 4-2, courtesy of an audacious piece of skill by Sturridge; seemingly with little room to manoeuvre inside the Cardiff area, the No.15 produced a back-heel which married with Suarez's central run and the rest was history. No.27 of the season for the 27-year-old.

But Liverpool were not content. Keen to return the favour, Suarez rushed forward along the left side and, with Cardiff unable to cope with the movement of the Reds' strike duo, passed across for Sturridge to fire from yards out.

The hosts claimed a third through Mutch's late strike, but Suarez promptly scampered to the other end of the field and slotted away to continue his side's challenge at the top of the Premier League.