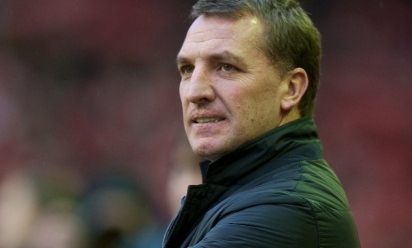 The manner in which Liverpool battled to secure a crucial 4-3 victory over Swansea City on Sunday was one to be proud of, according to Brendan Rodgers, who again highlighted the 'character' in his team.

With 20 minutes played at Anfield, the Reds appeared to be laying the foundation for another straightforward Barclays Premier League win on home soil - with strikes from Daniel Sturridge and Jordan Henderson earning a 2-0 lead.

Back came the visitors, though, and a second of the match by Sturridge was required to maintain an advantage for the hosts at the half-time break, following conversions from Jonjo Shelvey and Wilfried Bony on behalf of the Welsh side.

The latter brought the score level with the encounter's sixth effort after winning and successfully taking a spot-kick two minutes into the second period. However, Henderson hauled Liverpool over the line with a close-range finish as the clock ticked away.

Although the display was one of stark contrast to the respective routs of Arsenal and Everton in L4 already this year, Rodgers reflected on three points which he always expected would be difficult to claim from his former club.

"It was an excellent three points for us," the manager told reporters at his post-match press conference. "Yet again the offensive side of our game was very good to get four goals.

"We didn't defend anywhere near well enough today in aspects of our game. But to come out of it with the three points, we're very pleased. It was a very good win against an outstanding team.

"We have probably been spoiled here at Anfield, to be honest. People will walk away and think: 'We're normally winning by three or four at half-time' - the game is over and everyone is sat comfortably and enjoying it.

"Today we had to fight. Swansea drew in the week and should have beaten Napoli with an outstanding performance. They have come here and demonstrated that they are a good side.

"This was a much more difficult game than it would have been three weeks ago, because of what Garry Monk has done with the team. He's made them aggressive, got them fighting, he's got them pressing, working and passing it the way they can play - it's crisper and sharper.

"He has organised them really well. The game was going to be a really difficult game for us. We take great pride in the character today, the quality of our goals and that determination to get the job done. It's a wonderful sequence that we've had here and we aim to keep that going." 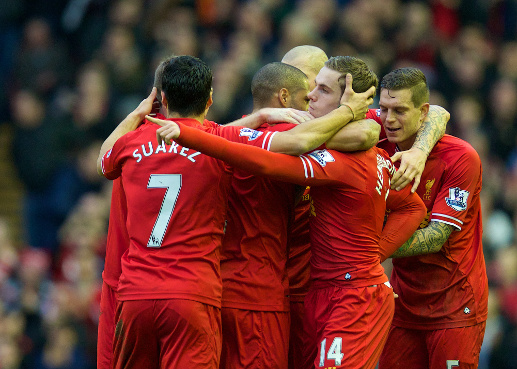 Having watched Arsenal, Chelsea and Manchester City all win their fixtures on Saturday, there was an element of pressure on Rodgers' side to maintain their challenge by following suit against Swansea today.

The Northern Irishman explained why, at this stage of the campaign, the necessity to churn out results on a weekly basis is balanced, in his vision, with the desire to produce expressive football.

"I always worry about playing good football; I'm not one that is totally satisfied with just grinding out results," he continued.

"It's the point of the season where it is about winning, that's what professional sport is about at this level - winning games. Especially when you're up there challenging.

"I will always concentrate on performance because I ultimately think that the consequence of performing well consistently is good results. This season, we have showed that.

"When we play well, more often than not we get the win. There have not been too many times this season where we have talked about hard-luck stories, playing really well and not winning.

"Today, we weren't quite at our best but we scored four goals and won the game. That was a very important three points for us. I would take a 1-0, don't get me wrong, a clean sheet and a 1-0 absolutely.

"We had spells sporadically where we had the ball and good combinations. I thought we were better when Joe Allen came on; I thought Joe was outstanding. I felt we needed to get hold of the ball and press it better, but we can't be perfect.

"In the big games, we've been at our best. They've brought the best out of us - Tottenham, Arsenal, Everton. It was one of those games where there was maybe a little bit of pressure.

"Everyone wins the day before, even though you try to take that pressure off, mentally and psychologically there's maybe that feeling that you know you've got to win.

"Also, we were playing against a good side. I want us to show that bit more calmness at times, but I thought our nervousness defensively caused that. You have to have that solidity and I thought we were nervy from behind today, and that then didn't give us confidence.

"It's certainly something we need to be much better at. We haven't seen that for a while now, but we'll improve on it and work on it during the week."

Keen to talk positively about another electric performance from his charges in an attacking sense, Rodgers did nevertheless answer questions regarding the issues which led to conceding three goals.

He said: "I'm not overly happy with our defending today, to be honest. It's not coaching; some of the things that we have conceded goals in, you can't coach that.

"There's a feeling when you're in the game of how to defend. You have to use that experience to be able to defend properly. I've always said that since I've been here. Today we had moments in the game that we weren't so good at.

"I'll focus on the other side - our character to keep going. We were 2-0 up. We got pulled back to 2-2. But we kept going. I thought two of the goals were probably soft.

"The highlight for us today was probably our aggression going forward. We scored four and maybe could have had a few more.

"Again, we'll analyse the other side of our game and look to improve it. I think it's not something that is planned. You see how we press the game and how aggressive we are in trying to get the ball back.

"But we conceded poor goals. It isn't so much structurally. It's just mistakes or decision-making that costs us. There's absolutely no doubt we'll continue to work on that side of it.