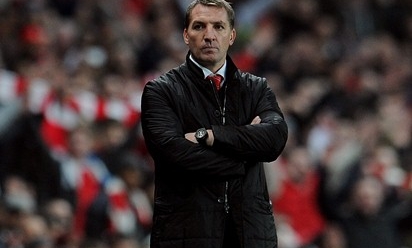 Our cup exit in action and reaction

Brendan Rodgers considered his side's performance in suffering an undeserved 2-1 defeat in the FA Cup at Arsenal on Sunday to be worthy of the growing expectations being developed at the club.

Liverpool were undone at the Emirates Stadium and eliminated at the fifth-round stage of the competition, as strikes from Alex Oxlade-Chamberlain and Lukas Podolski handed the Gunners a strong advantage.

The Reds were dominant in their response, however, with Steven Gerrard's spot-kick midway through the second period paving the way for a spell of huge pressure by the visitors in North London.

Although the equalising goal did not arrive, Rodgers described the display as 'outstanding' and drew a comparison with the league fixture between the two sides on the same ground last November, when Liverpool were overpowered 2-0.

"I thought our performance level was outstanding," said the boss at his post-match press conference. "I remember being sat here a number of months back after the league game and Arsenal were clearly the better side that day.

"So to come here and virtually dominate much of the game, and look a real threat going forward, was great. Then to end up with nothing in the game was disappointing because it was a competition we wanted to do well in."

Losing against Arsene Wenger's team denied Rodgers and his players the opportunity to take on neighbours Everton in a Merseyside derby quarter-final, after the draw had been conducted earlier in the day.

The Northern Irishman commented: "It's just about missing out on the quarter-final. We were happy to have a home draw, no matter who it was against. We love playing at Anfield - it's been a real great place for us over this last year or so.

"We've been building up momentum in our game, in particular at home, so irrespective of it being Everton, it was something we would have looked forward to. We can't control that now, we can't worry about that. We've now just got to focus on Swansea next week.

"It's an incredible club. I have learned in my period of time here, having worked right inside it, what a real institution it is. The reality of where it was at and where we wanted to be was two different places when I came in.

"We're just trying to progress it and build the club back again, and in a way with young players and developing a style of football that entertains our great supporters. The expectation is there because we have done so well."

Daniel Sturridge lined up at the Emirates aiming to find the back of the net for the ninth consecutive appearance in Liverpool colours - a potential achievement which would have made club history.

As it happened, the No.15 was thwarted in three promising situations, including two during the opening five minutes of the fixture, but the manager expects the right response from his forward. 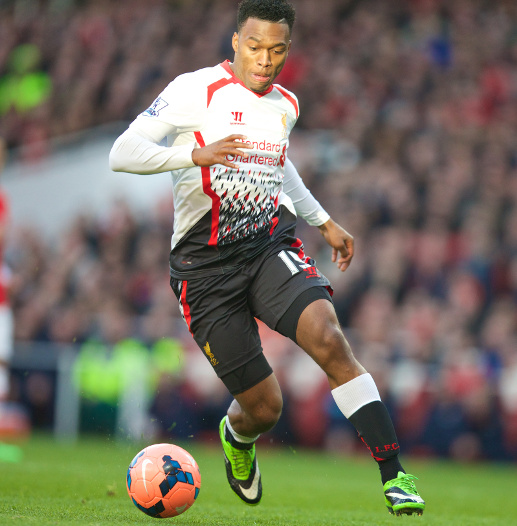 "He's a wonderful player," the 41-year-old reflected. "He'll be really disappointed because he had a chance to break a record today. He's had three chances that, for him, are big chances.

"He's always a threat, that's why you keep him on - his pace will always take him in there. He's disappointed and he's disappointed for the team as well because he takes on that responsibility.

"It's always difficult straight after the game because there's so much emotion in it. The players know what I feel and my thoughts on it - I thought they were outstanding in their performance level.

"We could have easily had another five or six goals today, but we weren't as clinical. Daniel will be fine. He'll be disappointed because we've lost and he'll think he should have scored, but we'll refocus and go again next week."

Luis Suarez won the penalty which provided the Reds with a lifeline, having been fouled by Podolski; shortly after, the Uruguayan appeared to be brought down again - this time by Oxlade-Chamberlain.

Asked if he believed the referee should have awarded a second spot-kick, Rodgers said: "Yes, absolutely. I think the first one, Luis gets clipped and it's a clear penalty.

"I thought the second one was even clearer. We're bitterly disappointed to have not got that because then it would have kept our momentum going for the final stages of the game, in which I thought we were on top.

"We're a team that is really aggressive in our attack and we provoke a lot of challenges because of the aggression in our offensive game. Especially Luis - he's always in and around the box, he's always asking questions of defenders. He's got one penalty but should have had two today."

Elimination from the FA Cup leaves Liverpool fighting on one front for the remainder of the season, the Barclays Premier League, and reporters questioned if that scenario could aid the Reds' push for success in the league.

Rodgers responded: "It doesn't feel like that now because we want to play and we want to be in as many competitions as we can. But I suppose it narrows our focus now to one competition.

"We'll just continue with the confidence and the belief that we have been playing with. You saw it today and if we play with that aggression, we're going to have a really exciting 12 games to finish the season.

"But I wouldn't like to say that we want to be out, because it was a competition that we wanted to get to the final of. Unfortunately, we've lost, so congratulations to Arsenal, who go through. We've got to go home and lick our wounds."