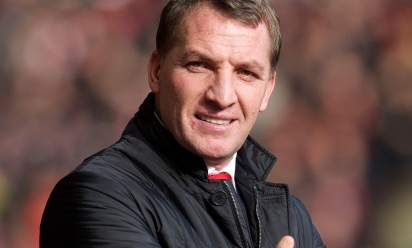 A subtle tinkering of his lethal front three was a crucial factor in Liverpool's 5-1 destruction of Barclays Premier League rivals Arsenal on Saturday, according to manager Brendan Rodgers.

The Reds boss fielded the same starting XI for the third consecutive fixture, but the positioning of attacking triumvirate Raheem Sterling, Daniel Sturridge and Luis Suarez was altered.

Rodgers' tactical switch was rewarded five-fold, with a double from Sterling and Sturridge's 15th league effort of the campaign adding to Martin Skrtel's quick-fire brace inside 10 minutes.

The Northern Irishman told reporters: "Today, we were against a team that are very experienced and have led the league for a large part of the season.

"We shifted it about tactically. We played Daniel Sturridge through the middle to try to exploit his speed centrally. Luis Suarez played in a wider role today and put in a selfless job.

"We switched Raheem Sterling over to the left side to penetrate and to control Sagna a little bit. Overall, the players were tactically brilliant and you saw their appetite and hunger for the game. That was important for us.

"We were brilliant today, a wonderful performance in such a prestigious game between the two teams. We do a lot of work on our pressing. I always feel if we press well, we can pass well.

"To play like that, not just the result, but the performance level was absolutely out of this world. I'm very pleased and it's another marker for us that we're getting better and improving all the time."

A thrilling combination of relentless pressing, searing pace and clinical finishing swept the Gunners aside in front of a raucous Kop, crystallising the philosophy Rodgers has honed since taking charge.

Arriving just 11 days after the Reds outclassed neighbours Everton in a pulsating Merseyside derby, journalists questioned the manager on whether today's display was the finest of the season so far.

"Tottenham away was outstanding; Everton at home we were outstanding in a pressure game; we got the result against Manchester United and played reasonably well.

"This year was going to hopefully be another big step for our development. Look around the team - we've got 19-year-old players, Raheem Sterling was incredible.

"We had an 18-year-old coming on, Coutinho is 21, young Jon Flanagan is 20 years of age. It's a very young side, but with a wonderful appetite for the game and a wonderful ability to learn.

"They want to learn and progress. You can see as time goes on, the idea to press well and pass well. That was the key for us today."

In claiming three points from the clash with Arsene Wenger's side, Liverpool both reduced their arrears to the teams at the summit of the Premier League and strengthened their challenge for a Champions League berth.

Rodgers reflected: "There's no doubt we've been outstanding for a big part of the season. We've had one or two off days, but in the main the quality of our game has been incredible.

"The objective has always been to finish as high as we possibly can, but you have to also look at the other teams around you. We'll just keep focused and keep our concentration.

"I want to be in a position where we can really challenge for the title. The players have been incredible; we just hope to continue with that development and see where it takes us."