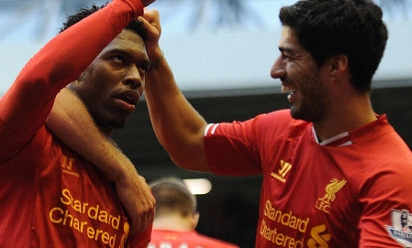 Brendan Rodgers has offered an insight into how the Barclays Premier League's deadliest strike duo has been allowed to wreak havoc upon defences this season.

The statistics behind Luis Suarez and Daniel Sturridge's partnership are nothing short of staggering. Between them, in 35 league appearances, they have produced 37 goals.

Such a tally puts them firmly on course to surpass the feat achieved by two Liverpool icons, Roger Hunt and Ian St John, who shared 52 strikes during the 1963-64 campaign.

Speaking to the Liverpool Echo, Rodgers labelled the pair 'outstanding' and explained the more intricate workings behind their dynamic combination.

"There is a lot of tactical thinking that goes on behind them," Rodgers said.

"3-5-2 is a system we can play but it's not one I prefer to play because of the space you offer up the sides. I like to have superiority in the middle of the field.

"Both Luis and Daniel can play on the sides, but when one of them does we give them the freedom to move and penetrate, especially Daniel because his penetration is so fast and that's a key part of the game for us.

"They interchange because they are floating players anyway and their movement is really dynamic. When they haven't got the ball they have to work like animals as there is a big responsibility on them to defend that side of the field.

"They are different types of players who fit into a system. What we have is two individuals with qualities which are different. Both have a desire to score goals but they are not your traditional partnership."

While Suarez and Sturridge lead the line in search of goals, the manager is faced with the task of shoring up the space behind them.

The Reds' 4-0 demolition of Everton emphasised how this can be played to perfection, with the front two interchanging and Sturridge gliding in from wide, while the midfield press the opposition from the first whistle.

"Behind Daniel and Luis we just need to ensure that tactically we can block and cover the spaces," Rodgers continued. "That's something that Steven Gerrard and Jordan Henderson did so well against Everton.

"I'll always go with an offensive mind-set but there always has to be tactical discipline. I see them as two very talented players we are looking to integrate into a team structure. My job is to fit them into the team.

"They all have to buy into the team and we've seen that during my time here. The team is a work in progress; I don't set it up just for Luis and Daniel.

"It's about good players and maximising their talents. At this moment in time as we have evolved as a team and got better they have grown with it as well."