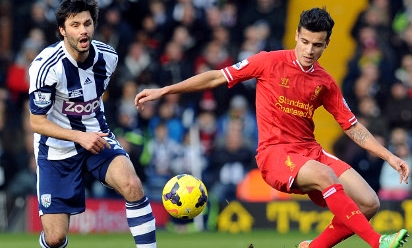 Daniel Sturridge's 50th Barclays Premier League goal was only enough to earn Liverpool a 1-1 draw from a hard-fought meeting with West Bromwich Albion at the Hawthorns on Sunday.

The 24-year-old registered midway through the first half from a Luis Suarez assist to hand Brendan Rodgers' team an advantage and achieve the landmark of a half-century in England's top flight.

But former Everton striker Victor Anichebe rose from the bench in the second period and struck within minutes of entering the action, capitalising on a defensive slip-up to claim a point for the Baggies.

It was confirmed before kick-off that Rodgers had retained exactly the same starting XI as the one that successfully downed Everton earlier in the week. Joe Allen, meanwhile, was fit enough to join the substitutes.

The first chance for Liverpool arrived on seven minutes, when Suarez drew a foul by Baggies midfielder Claudio Yacob yards outside the area; the Uruguayan could not produce another set-piece spectacular, though, and the effort deflected out off the wall.

Shortly before the quarter-hour mark, the No.7 was released with just a single defender to navigate - courtesy of a penetrating pass by Sturridge - but West Brom managed to crowd the Premier League top scorer and the opportunity faded.

Steven Gerrard smartly stretched a leg to block a driven shot by Youssouf Mulumbu, but the opening 20 minutes concluded with a level of activity in stark contrast to the events witnessed in Tuesday's Merseyside derby.

That changed on 25 minutes. Philippe Coutinho's incisive delivery inside the right channel allowed Raheem Sterling to speed in behind; the winger then laid off to Suarez, who somehow found the space to dink a cross to the back post and provide a simple finish for Sturridge.

On 33 minutes, it was almost 2-0 when Suarez attempted to divert Coutinho's inswinging corner beyond Ben Foster and Kolo Toure tried to force the loose ball over the line, only to be denied by the Albion 'keeper and his defence.

With momentum on their side, Rodgers' charges searched for a second - Coutinho cracked a low strike narrowly wide of the near post and Jonas Olsson had to react quickly to prevent Aly Cissokho's cross from reaching Suarez.

In riposte, Zoltan Gera - a scorer when the Reds were beaten on this ground in the first fixture of 2012-13 - unleashed a searing hit which whistled towards the top corner and, fortunately, travelled wide of Simon Mignolet's post.

When action resumed for the second half, it was the hosts causing the early concern. Gerrard tripped the dribbling Gera on the right edge of the Liverpool box and Chris Brunt was poised over the free-kick threateningly - his curler was too high, however.

The effective winger troubled the visitors once more moments later, connecting with a centre by his Hungarian teammate on the volley, but watching Jon Flanagan recover immediately to divert the shot as Pepe Mel's team upped the ante.

Mignolet was called into reflex action from the subsequent corner, keeping out a thunderous header by Gareth McAuley with an important save to ensure the Reds retained their superiority in the scoreline.

Kopites in attendance at the Hawthorns were on their feet expecting the advantage to be doubled seconds ahead of the hour mark, as Suarez danced around a succession of defenders with exquisite control and guided a finish that proved too close to Foster.

As the encounter entered its last quarter, the Baggies began to exert a level of dominance and the Reds' Belgian goalkeeper deserved further credit for his sprawl to the right after another dangerous set-piece situation involving Brunt.

But the stopper was powerless to keep out the equaliser which followed; in possession at the edge of his own territory, Toure sent a pass straight to recent substitute Anichebe, who instantly smashed a precise drive into the bottom left corner.

Rodgers' response was a double substitution - Allen and Martin Kelly replacing Coutinho and Flanagan respectively. The Welshman worked Foster shortly after, firing along the ground as Martin Skrtel pulled back Gerrard's delivery.

Hoping to make amends for the previous error, centre-back Toure climbed highest to connect with a corner from the Liverpool captain, but the Ivorian international misplaced his headed effort and it carried wide.

Neither side could muster a winner in the precious minutes that remained, leaving the Reds to return to Merseyside with a point in their ongoing quest for a top-four berth in the Premier League.