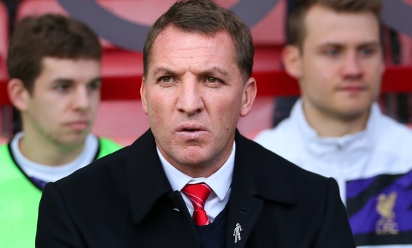 Brendan Rodgers admits Liverpool were made to work hard for their 2-0 victory over AFC Bournemouth on Saturday, but is confident they'll be ready for the visit of Everton next week.

Goals from Victor Moses and Daniel Sturridge secured a passage into the fifth round of the FA Cup, but the Reds were required to battle for the win on the south coast against the Championship side - particularly during the opening 45 minutes.

Rodgers elected to name a strong starting XI to take on the Cherries, including the likes of Sturridge, Luis Suarez, Steven Gerrard, Jordan Henderson, Martin Skrtel and Philippe Coutinho.

However, the boss is confident his squad will have ample time to recuperate ahead of Tuesday evening's mouth-watering Merseyside derby clash with Everton at Anfield.

"We have a very thin squad, and along with that we've got a number of injuries, but the tradition of the FA Cup for Liverpool is huge," Rodgers told his post-match press conference.

"We want to pay respect to the competition because we want to get to the final and win it if we can.

"The players have had enough recovery time and will recover well for Everton. They have everything there to recover.

"We go into Tuesday's game on the back of a good win against a good Championship side."

Following a combative first half, Rodgers was pleased with the response of his players after the break as they moved into Sunday's last 16 draw.

He said: "I thought the second half was more comfortable than the first. We had some good spells and scored a good goal on the counter-attack.

"Bournemouth are a very good side and we give credit to them first of all. They have a great idea when it comes to playing the game. Eddie is similar to myself in terms of his philosophy.

"It's not easy when you're a young manager and you stick your neck out to get your teams to play and pass the ball, but you see the great work he does with his staff on the training field.

"They were excellent, we didn't work hard enough in the first half, but once we re-organised at half-time we were much better.

"Some of quality today was very good on a difficult pitch."

Rodgers continued: "There have been lots of games recently that have taken me back to a year ago where we might have lost, against Stoke for example.

It was Moses who opened the scoring for Liverpool midway through the first half with a powerful drive from the edge of the box.

Rodgers felt it was just rewards for the determination the Nigerian has been displaying in training to try and force his way back into the starting line-up.

He said: "He was much better today and it's testament to how hard he's been working in training. I said to him you take into the game how hard you work in training.

"Today was a chance for him to do that. He took his goal really well and I thought at times he was really bright, so I am very pleased for him."

Liverpool thought they were facing up to another injury scare during the second half at the Goldsands Stadium when Skrtel was involved in a clash of heads that left him requiring bandaging to a wound.

Rodgers confirmed, however, the Slovakian will be fit to face the Toffees, saying: "He had staples in his head, so he might need to grow some hair now! He'll be fine."

Meanwhile, the Liverpool manager was full of praise for his Bournemouth counterpart, Eddie Howe - and tipped the 36-year-old for a successful career in management.

"When you have a team that wants to play football, they are the most courageous players on the field," he said. "It's easy to coach a team to just sit back, not want the ball and just wait to lump it up the pitch.

"The courage the Bournemouth players showed today was fantastic. They have got better as the season has gone on. It's a wonderful club; Bournemouth has a great tradition and a great history.

"In this country, playing good football is deemed too nice. That's why we complain when we get to World Cups and we say our players aren't technically good enough.

"It's managers like Eddie Howe and such that will take the game forward in this country because they have a philosophy.

"There is no right or wrong way to play football, but for many years in the country the coaches who have stuck their neck out and got their teams to play football have been discouraged."

Rodgers added: "He is someone who for sure will go on and manage at the top level. Bournemouth are a great fit for him. He was a great player here and you can see how the players play for him.

"He's got a long career ahead in management and there is no question his ideas can be suited to the very top."