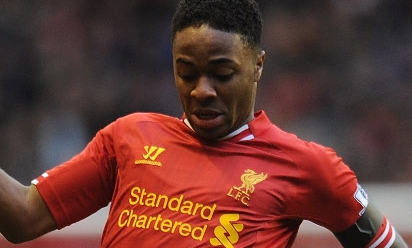 Aspas: It was a wonderful moment

Raheem Sterling has explained how a frank half-time team-talk from Brendan Rodgers forced Liverpool to raise their game against Oldham Athletic and clinch a 2-0 win at Anfield on Sunday.

Lee Johnson's Latics proved stubborn opposition on the day and for 45 minutes there was no shifting the organised League One outfit.

However, after the break, the Reds demonstrated much more intent, boosted by the introduction of Brazilian duo Lucas Leiva and Philippe Coutinho.

The home side upped the tempo by moving the ball quicker - and Sterling came to the fore to produce two decisive contributions.

First the winger carved an opener after crisp passing gifted him the chance to pick out Iago Aspas unmarked in the penalty area.

Then, with the Latics resurgent at the Anfield Road end, the 19-year-old powered goalwards and, with a little help from James Tarkowski, put the game beyond doubt in front of the Kop.

"The manager told us to get our mentality right for this game because we knew what defeated us last time [against Oldham]," Sterling told Liverpoolfc.com.

"His message at half-time was that we needed to move the ball a lot faster and get them working and chasing the ball. That's what we did second half, and we got the two goals which gave us the win.

"Stevie gave me the ball and I knew I had to take the guy on. I got half a yard on him and crossed it in. It was a great finish, the ball was behind him a bit, but he found the bottom corner and it was a great goal."

In rifling home Sterling's cross, Aspas netted his first competitive goal for the Reds since joining the club from Celta Vigo in the summer.

Sterling was pleased to see his teammate get off the mark after 11 games - and he backed Aspas to build on his first strike over the coming weeks.

"It will give him a big boost," insisted the winger. "He comes in and every day in training he's scoring goals and creating chances. So today was a great opportunity for him and he's scored, so hopefully that will give him a massive boost for the next chance."

Sterling has now started nine consecutive games for the Reds since being reintroduced to the side for the disappointing defeat against Hull City on December 1, 2013.

Despite that loss, Rodgers persisted with the Academy graduate, who has repaid his faith with three goals and a string of impressive displays.

"I'm enjoying it massively and the manager has put his trust in me to put me out every week so far," said Sterling. "Hopefully I can deliver on the pitch and get some more assists and goals for the team.

"It was a good win today. We'll just take it into the next game and hopefully we can get the result there and take it step by step as a team."