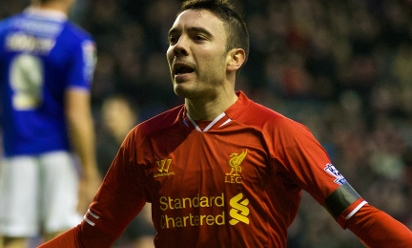 Iago Aspas' second-half effort and an own goal edged Liverpool into the fourth round of the FA Cup with a 2-0 victory over Oldham Athletic that the Reds were forced to work hard for at Anfield on Sunday.

The Spaniard struck on a bitterly cold afternoon in L4, notching his first competitive strike for the club since joining last summer with a perfectly-executed finish into the far corner from Raheem Sterling's cross.

Liverpool's lead was doubled in the final 10 minutes as Sterling's blast from inside the Oldham box was deflected beyond his own goalkeeper by James Tarkowski.

In beating the Latics, Brendan Rodgers' side booked an away clash against either Bournemouth or Burton Albion in the next stage as the Reds search for an eighth triumph in the tournament.

The Northern Irishman opted for six changes to his starting XI, with Steven Gerrard the most notable player to return, after the skipper had featured as a substitute against Hull City earlier in the week.

Luis Alberto, Brad Jones, Martin Kelly, Victor Moses and Kolo Toure were the other men to step up, affording the likes of Philippe Coutinho and Luis Suarez a rest, while Academy midfielder Cameron Brannagan was included in the squad.

Before the action kicked off, the entire stadium paid tribute to Wayne Harrison, a former player of both clubs who recently passed away at the age of 46, with a minute's silence which morphed into applause.

The first chance for Liverpool was actually prompted by an Oldham corner. Jones collected with authority and his accurate throw out released Moses, who sprinted forward and fed Aspas on the left but could not connect with the Spaniard's return cross.

Oldham belied their League One status during the opening exchanges, harrying the home side and passing crisply, but Alberto served a warning by whipping an effort from 20 yards narrowly to the wrong side of the post on 14 minutes after a tee-up from Aspas.

An enthralling passage of possession predominantly involving Alberto and Jordan Henderson ultimately found Kelly arriving unmarked at the back post, but the defender's header across goal towards a waiting Moses was blocked.

The Nigerian international responded by assisting Alberto - an impressive figure in a central free role - for a thunderous drive which visiting goalkeeper Mark Oxley needed to push away with a strong pair of hands in the 23rd minute.

Oxley handled a left-footed Kelly curler more comfortably moments later, before taking a troublesome Sterling cross from the right flank, and Moses had a strike from the left channel blocked.

Jonson Clarke-Harris concerned the Kop with a penetrating dribble along the wing which was eventually halted successfully by Henderson in the Liverpool penalty area, and at the other end Sterling skied a shot after being played in by the Reds' No.14.

In the final promising action of the opening period, Alberto directed an incisive through ball into the path of compatriot Aspas, who lashed a cross-shot along the six-yard box which Oldham managed to clear.

The manager introduced Coutinho and Lucas Leiva to proceedings for the second half, in place of Alberto and Moses, and the former almost created the opener by planting a corner on Gerrard's head, but the midfielder's attempt travelled over.

It didn't matter, however, as the deadlock was broken on 55 minutes when Sterling took control in the Latics' area and delivered to the back post - where Aspas was waiting to calmly volley in the opposite direction into the corner.

Within two minutes, the same duo had combined to create an inviting opportunity for the Reds' No.9, who watched a close-range header bounce away off the woodwork. Coutinho subsequently blasted into the Kop end following more industrious work by Sterling.

But, to their credit, Lee Johnson's side fought back and Liverpool 'keeper Jones had to be alert to claw away a looping header by Danny Philliskirk after the attacker was found with freedom close to goal.

With 20 minutes remaining on the clock, the thriving pair of Aspas and Sterling drove forward in tandem and the latter pulled the ball back for the Reds' captain to smash an effort towards the near post which he claimed was stopped by Oxley.

Back came Oldham and Jones needed to produce a reflex stop to his left when Michael Petrasso spun neatly around the attention of defender Daniel Agger and instantly unleashed a rocket at the Australian.

Suarez joined the action as a substitute for Gerrard with 13 minutes left, while Agger was forced straight down the tunnel without a replacement - Rodgers had already made three changes - when he picked up a knock.

Nerves were calmed in the 82nd minute when Aspas fed Coutinho and the Brazilian's shot was blocked into Sterling's path; the winger fired goalwards and Tarkowski could merely deflect into his own net for 2-0.

That proved enough for the hosts, who can now look forward to a fourth-round encounter with either Bournemouth or Burton on the final weekend of January.