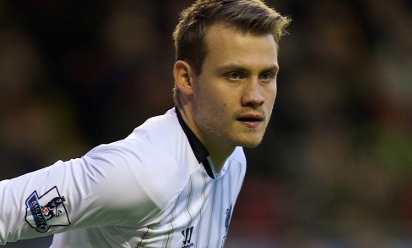 Agger: Not many have that moment

Simon Mignolet echoed the thoughts of his manager, Brendan Rodgers, as he reflected on an important three points for Liverpool against Hull City at Anfield.

The Belgian 'keeper was largely untroubled throughout the 90 minutes as the Reds denied the visitors a single shot on goal en route to a comfortable 2-0 victory.

Daniel Agger towered in the penalty area to power a header home prior to half-time, before Luis Suarez served up another piece of magic in front of the Kop, curling home an audacious free-kick.

Afterwards, Rodgers insisted it was Liverpool's best win of the season - and Mignolet emphasised the importance of a return to winning ways after back-to-back defeats at Manchester City and Chelsea.

"Hull are a very good team and it was difficult for us down there at the KC Stadium," the 25-year-old told Liverpoolfc.com.

"So it was a very important three points for us to get back on track. We can look forward now and make sure that we continue in the manner that we started the season and build during the second half of the season.

"It's always nice to be back in the top four - it's where we want to be. The only thing we can do is look forward and ahead to the next game.

"We're there now [in the top four] but that doesn't mean we are going to stay there. We'll do our best and we'll work hard to make sure that we get the points out of any game that comes along."

For Mignolet, the victory over Hull brought a first clean sheet since the emphatic 5-0 thrashing of Tottenham Hotspur at White Hart Lane on December 14.

It was the stopper's sixth shut-out between the sticks since his Liverpool debut back in August; however, Mignolet was typically modest when sharing the plaudits with regards to Wednesday's display.

"It's always nice to keep a clean sheet, but I think you do that as a team, with all the players involved," he insisted.

"It's very important when you play against teams like Hull, who were on a decent run and were a team that was in form. They pose a threat from set-pieces and we dealt with all of them, which was a positive and we can look forward to the next game now."

Injury to Mamadou Sakho left Rodgers with no choice but to reorganise his defensive line-up once again.

Daniel Agger, who had returned to the side as left-back for the 2-1 defeat against Chelsea at Stamford Bridge, shifted inside to pair with Martin Skrtel, while Aly Cissokho came in down the flank.

Despite the adjustments, Mignolet insists the four operated as a solid unit - and has backed any combination of defenders within the squad to flourish across the back line.

"You train with all the lads, day in, day out, and everybody at the club is very professional and deals with anything whenever they are asked upon," he said.

"Aly came in today and had a brilliant game - everybody is there to do a job when the gaffer asks them to and hopefully we can do that for the rest of the season."