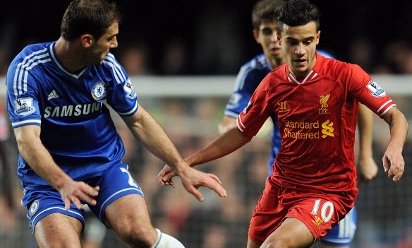 Liverpool were narrowly beaten for the second time in four days on Sunday as an early advantage was overturned by Chelsea to claim a 2-1 victory over the Reds at Stamford Bridge.

The travellers struck first on a crisp, cold afternoon in West London, Martin Skrtel latching onto a loose ball inside the Chelsea area from a set-piece to knock a straightforward effort home in the opening minutes.

But, as at Manchester City earlier in the week, a double response from the hosts in the first half completely overturned the scoreline - Eden Hazard and Samuel Eto'o providing the damage for Jose Mourinho's team.

Before kick-off at Stamford Bridge, it was revealed that Daniel Agger had been reinstated to Brendan Rodgers' starting XI, replacing Frenchman Aly Cissokho in the only change, and the defender wore the captain's armband.

Academy talents Jordan Rossiter and Brad Smith were named among the substitutes and the latter was introduced for the final 30 minutes of the encounter to make his senior debut for the club.

With just three minutes on the clock, Liverpool had an advantage. Philippe Coutinho whipped a curling free-kick into the Chelsea area which Luis Suarez tried to flick on, creating a chance for Skrtel to convert with ease from close range.

Seeking an instant response, the hosts forced Glen Johnson to produce a crucial goalline clearance after Hazard had worked Simon Mignolet, before Gary Cahill powered a header wide from a set-piece.

With momentum building for Mourinho's side, midfielder Frank Lampard carried possession forward in the 12th minute and unleashed a rocket towards the top corner which the Reds' Belgian goalkeeper expertly reached with a sublime fingertip over the bar.

Chelsea were enjoying a relentless period of pressure at this point and there was little Mignolet could do to prevent his compatriot, Hazard, from whistling the ball beyond his outstretched arm and into the roof of the net on 17 minutes after Oscar's run had been stifled.

David Luiz blasted an inviting opening far too high following industrious work from Willian, prompting what is becoming a typically slick and inventive passing exchange by the visitors.

Joe Allen, Jordan Henderson and Suarez combined with rapid distribution to release the former into the Chelsea penalty box with a sight of Petr Cech's goal, only for Cahill to scurry across and end the move with a block.

In keeping with the encounter at City on Thursday, this was developing into a clash you dare not take your eyes off - but unfortunately for Rodgers' side, the next decisive contribution put Chelsea in front on 34 minutes.

The Blues travelled down the right flank and Oscar ghosted into space in the channel before cutting a low cross into the area for Eto'o, who produced the first and vital touch to nudge a finish past the hand of Mignolet.

Johnson found Raheem Sterling in ample space with a through ball in behind as the first half drew to a close and, in turn, the winger set up Allen for a bending shot which required strong palms from Cech to keep out.

There was a slower tempo when the second half kicked off and it was the Reds who created the first clear chance seven minutes after the restart, with Mamadou Sakho looping a header past Cech but, unfortunately, onto the woodwork and out.

Again Chelsea wasted little time in responding and Eto'o was afforded a wealth of space a moment later when played through inside the right channel; Mignolet stood up strongly, however, to deflect the striker's hard effort.

Liverpool rallied and Henderson searched for a carbon copy of Suarez's recent strike past Cardiff City, picking out the Uruguayan with a lofted assist - but the No.7's well-timed volley was straight at the 'keeper on this occasion.

On the hour mark, 19-year-old Smith was handed a senior debut for the club as a replacement for Allen, who had suffered a knock, while Oscar threatened a third when he dispossessed Brazil teammate Lucas Leiva and planted a shot wide of the far post.

Trademark strength and dribbling in the Chelsea half by Suarez teed up Johnson for a left-footer which forced Cech to dive low and push around the post, then Hazard clipped a strike off target from a similar position.

The Reds pushed consistently in what time remained but could not produce a sought-after equaliser and slipped to consecutive defeats in the Barclays Premier League for the first time under Rodgers.