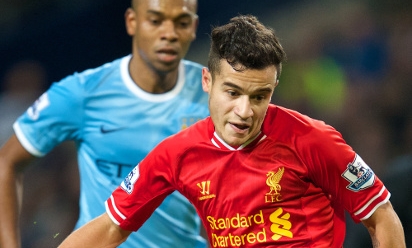 Liverpool could consider themselves unfortunate not to have taken something from a pulsating contest as they went down to a narrow 2-1 defeat at Manchester City on Boxing Day.

The Reds went into a 25th-minute lead when Philippe Coutinho slotted into an empty net from close range after Raheem Sterling had rounded Joe Hart - but City drew level quickly through Vincent Kompany's header.

The home side then went in front in an end-to-end encounter on the stroke of half-time when Alvaro Negredo finished off a rapid counter attack with an outside-of-the-foot finish.

Brendan Rodgers' side were valiant in their efforts as they pressed for a second-half equaliser, with Sterling going closest to netting, but were unable to take a point back to Merseyside.

The pre-match team news confirmed one change for Liverpool, with Aly Cissokho returning to the line-up in place of the injured Jon Flanagan. Meanwhile, there was a place on the bench for 19-year-old Academy starlet, Brad Smith.

Having topped the table at Christmas, the Reds got underway at the Etihad Stadium in third position in the Barclays Premier League following the day's earlier results.

No-one has scored more goals in the league this season than City and Liverpool and, therefore, an open start to the contest came as little surprise.

The hosts fired the first warning on five minutes when Jesus Navas' looping header grazed the angle of post and bar. Next, in a lively opening, Kompany rose highest to nod wide from Samir Nasri's corner, with Simon Mignolet untroubled.

Liverpool's first effort at goal arrived with 14 minutes on the clock, when Luis Suarez glanced off target from Lucas Leiva's corner before the Uruguayan clipped a free-kick straight at Hart soon after.

The visitors thought they'd carved open a golden chance to break the deadlock before the 20-minute mark when Suarez's through ball sent Sterling bounding down on goal. However, the winger's attempts to net were thwarted by the raised flag of the referee's assistant for offside. TV replays suggested play should have been allowed to continue.

Nevertheless, Liverpool were growing in stature and duly took the lead on 25 minutes. An incisive move resulted in Sterling rounding Hart, enabling Coutinho to slot the ball into the empty net.

City were able to muster a near-instant riposte, however, and after a fine Martin Skrtel challenge had denied Yaya Toure, Kompany rose well to guide a header beyond the dive of Mignolet and level the scoreline, despite the efforts of Joe Allen on the goalline.

With half-time looming, the Reds went close to going back ahead when a brilliant move involving Suarez, Sterling and Coutinho pulled the home defence apart, though Hart's reflexes denied the Brazilian a second before the break with a low stop.

But it proved there was to be another strike before the interval, and it was City who claimed it when Negredo finished off a speedy raid forward with a finish from just inside the box that Mignolet was unable to palm over the crossbar.

Liverpool began the second period with attacking purpose; Jordan Henderson struck narrowly over and Suarez twisted and turned beyond Pablo Zabaleta to force Hart into a save in an impressive opening.

The same two players were involved again shortly after as the Reds threatened once more. Sterling's clever pass almost picked out Henderson's run towards goal. The loose ball broke for Suarez, but his attempt struck the legs of the No.14, who was in an offside position in the six-yard box.

With 20 minutes remaining, Rodgers opted to introduce Victor Moses into the action in place of Coutinho, with his side continuing to look dangerous.

Glen Johnson was unable to adjust his feet quickly enough to net after Henderson's cross had rebounded into his path, while the midfielder then went close himself but his improvised back-heeled flick lacked the power to bypass Hart.

Liverpool should have made it 2-2 on 73 minutes when Suarez stormed down the left before delivering a brilliant centre for Sterling, who unfortunately could only loft over the bar on the stretch from yards out.

Rodgers' charges continued to toil until the final whistle in their attempts to level the game, but City were able to hold out for the win as Liverpool slipped to fourth in the table.