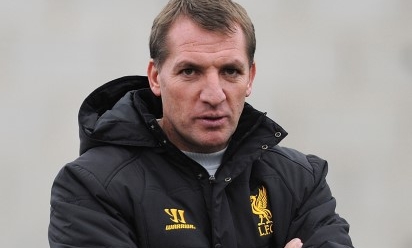 Brendan Rodgers insists Liverpool will head to Manchester City with the 'confidence and belief' to reward fans with another gift for this festive period, having provided them with the perfect present of being top of the table on Christmas Day.

The Reds sat at the summit of the standings on goal difference on December 25 for the first time since 2008 following an excellent opening to the season.

City, meanwhile, have also looked formidable and are just a point behind Liverpool in third, boasting a perfect home record so far this term.

Nonetheless, Rodgers is confident his men will journey to Manchester in optimistic mood as they aim to maintain their first-place status and improve on the two 2-2 draws they played out with the Citizens last season.

He told Liverpoolfc.com: "Our idea is to play an aggressive, attacking game - and that is how they play also.

"We'll take big confidence into the game because in the two games last season, we were the better side and didn't get the results to match the performance level because we made mistakes in the games that cost us.

"We know it's a big task, they've beaten a lot of good teams this year, but we have the confidence and belief we can go anywhere and, with the nature of our game, hopefully we can go and put in a good performance.

"The game is based around confidence and if you're confident, you have a greater chance of succeeding - that's everything."

Asked if being top was the ideal Christmas gift, Rodgers added: "It is, yes - and it's a reward for how we've been over the course of this year.

"Of course, it's a very nostalgic time in the football calendar, so it's obviously poignant that we're top and it's a reward for the great work that's gone on here at the club.

"Certainly in terms of this moment it doesn't win you any trophies or win you the league, but it certainly shows that we've started the season very, very well - and this period for us has been ongoing since January, so it's been more than a great start, it's been the continuation of a lot of great work over a number of months.

"For us, it just reinforces the confidence and belief about how we're working - and as each day and game goes by, we're looking to improve on that. It's been a great effort by the players, but we know we've got a lot of hard work to come."

While Liverpool supporters across the globe celebrated the club's position at the peak of the standings, the ultra-competitive nature of this season's league means that just two points separate the Reds and fifth-place Everton.

"It demonstrates how close the league is, and it's one where if you lose a game or two, it can really push you out of the top four," considered Rodgers.

"Our idea is to try and set up camp in the top four in order for us to progress in our development here as a club and a team.

"At this moment in time, it's a good indicator of where we're at, it shows the league is very, very tight, and that we have to retain our concentration and focus in order to maintain that."

Liverpool's trip to City is the first of two top-of-the-table away games this week, with a clash against Chelsea at Stamford Bridge to follow on Sunday.

Rodgers, though, stressed that no-one within the camp will look beyond the Boxing Day showdown with Manuel Pellegrini's men.

"We go to Manchester City first and that is our only concentration," he stated. "We've been served well by focusing on our next game and making sure our concentration is fully on that. I see it as a great opportunity for us.

"We want to go and produce the kind of performance we did in our last away game at Tottenham."