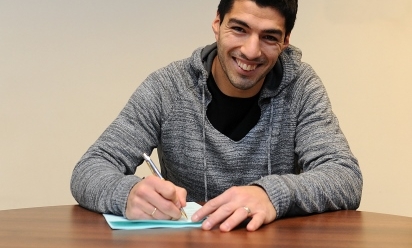 Liverpool chairman, Tom Werner, believes the news of Luis Suarez signing a new, long-term contract with the club is the latest step on the Reds' journey to recreating the success of previous years.

On Friday, it was announced that the prolific No.7 - who has notched 17 times in a mere 11 appearances so far in 2013-14 - had written his signature on a fresh deal to further extend his stay at Anfield.

The Barclays Premier League's top scorer will attempt to celebrate the occasion by extending his tally, and sending his team top of the table, when Cardiff City come to Merseyside on Saturday.

Werner described the Uruguayan's decision to commit as a 'significant step forward' and praised manager Brendan Rodgers for the work carried out to maximise the efforts of one of the world's finest players.

"We are delighted that Luis wanted to extend his contract," he told the Liverpool Echo. "He's very happy to be at Liverpool and we are very happy that he will continue to represent the club for years to come.

"We are working very hard to keep our best players here. This demonstrates our commitment to build a team that competes at the highest level both in the Premier League and in Europe.

"We prefer to do our work privately. We had been speaking with Luis and his agent for a while. We are all glad it's been resolved. Luis is happy with the contract and we're happy with it too.

"We're going into an important stretch for the club. The Christmas period is key and Luis signing the contract is a great boost for everyone. Luis is a world-class talent. Whenever he's on the pitch we have a chance to win.

"I have to say Brendan did a great job encouraging Luis to remain with the club. Luis also felt he received an enormous amount of support from the fans and that was very important in his decision to stay.

"Luis sees the potential of Liverpool Football Club. He can see that we are competitive and that we are moving in the right direction. Luis signing the new contract is a significant step forward."

Werner watched on as Rodgers' side dismantled rivals Tottenham Hotspur 5-0 at White Hart Lane last Sunday - including a Suarez brace - to leap into second place in the standings with a 10th victory.

The awesome display of pressing, passing and precision was a true team performance, and the American assigned credit for the collective effort to the manager's fine-tuned strategy.

He continued: "John Henry and I don't get too up after a victory or too down after a loss, but clearly we are far on from where we were at this time last year.

"You only have to look at the number of goals we have scored, not only compared to last season but also compared to the other top teams this season.

"It's not only Luis who has performed very well over the last month. What struck me about the game at Tottenham was that everyone contributed. Coutinho, Henderson, Flanagan, Sakho, Skrtel, Allen - it was a real team performance.

"We kept the intensity going throughout. We didn't retreat into a defensive shell. The defence looks good - Simon Mignolet has been outstanding for us since he signed for the club.

"If we can keep that level of intensity in our performance it would be joyous. It comes back to the fact that Brendan is doing a number of things so well. He has great communication skills. He's very articulate in his strategy and the players have responded to him."

Should they overcome Cardiff on Saturday, the Reds will leapfrog Arsenal at the summit of the Premier League table, with potential to remain there over Christmas if the Gunners cannot beat Chelsea on Monday.

While the club's owners, Fenway Sports Group, are cautious of not looking too far into the future, Werner is equally aware of what tangible trophy success would mean to Kopites.

He concluded: "I don't like making predictions. I just look at the season one chunk at a time. We have got a very difficult schedule ahead of us over this period and we just need to see how we fare through that.

"If the team stays healthy then we saw last weekend the kind of football the team is capable of playing. We are capable of doing well against anyone.

"The league is extremely competitive this season. Manchester City had a tough time when they played Cardiff so we certainly can't take anything for granted at Anfield on Saturday. We just hope the team continues to play so well and we'll take it one game at a time.

"Winning the World Series with the Red Sox was a wonderful time for us. We know how the success of a team can really lift the spirits of a city. We hope and dream of the same kind of success with Liverpool at some point in the future."