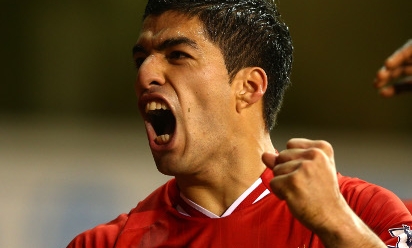 Luis Suarez was the creator and provider in his first Barclays Premier League match as Liverpool captain, leading the side to a resounding 5-0 victory over Tottenham Hotspur at White Hart Lane.

The 26-year-old was handed the armband for the second time in his Reds career as Steven Gerrard was missing through injury.

He was on the scoresheet twice, and superbly helping to create the other three goals, which were claimed by Jordan Henderson, Jon Flanagan and Raheem Sterling.

There was just one change to the starting line-up, with Lucas Leiva returning to the team in the place of Gerrard.

The Reds were presented with a chance in the first minute, as the brilliant Suarez played in Philippe Coutinho, but the midfielder wasn't expecting the ball, and snatched at his shot.

The trend continued in the opening stanza, with Liverpool asking Spurs all kinds of questions in and around their box. Sterling was the creator-in-chief, bursting forward and getting the better of Kyle Naughton.

On 16 minutes, he skipped down the right channel and put pressure on Hugo Lloris' near post. In the next move, the winger got behind Spurs' defence again, but the French 'keeper averted the danger.

Suarez had seen an earlier effort go marginally wide, but there was no such repeat when Henderson slipped him in on 18 minutes.

It was a breathtaking passage of play from Liverpool. Sterling fed Suarez, who in turn sent the ball in Henderson's direction. The skipper on the afternoon outpaced and out-thought several Spurs defenders to run onto the No.14's neat pass, before coolly side-footing past Lloris.

Three minutes later, the gloveman came out on top as he thwarted Suarez in a one-on-one situation. The Uruguayan was involved again as Liverpool continued to pour forward. He twisted his way in from the left wing and pulled the ball back for Coutinho, whose volley hit the ground, bounced up and cannoned off the crossbar.

There was a rare chance for Spurs, but Nacer Chadli failed to direct his free header on target.

Suarez was again the centre of attention as Lloris failed to deal with a high ball, inviting the No.7 to shoot at an open goal. But as he gathered the ball and adjusted his positioning, the home defenders and Lloris had recovered in time to deny him.

Sterling was back in the attacking mix again, beating his marker and launching a shot which was blocked. He followed that up with a wonderful cross-field ball, which Gerrard would've enjoyed watching, out to Coutinho.

The Brazilian's brilliant touch set up a peach of a pass to Henderson, whose shot was batted away by Lloris. The home 'keeper then did well to deny Suarez from the rebound. But he couldn't do anything to halt a persistent Henderson, who volleyed in to double Liverpool's cushion.

Roberto Soldado put the ball in the back of the net just before half-time, but it was correctly disallowed as he shoulder-barged into Simon Mignolet to go through on goal.

After the interval, Soldado was again a nuisance. The Spaniard was played in on the right channel, but rushed his shot and hit it wildly over during a period of pressure from the visitors.

Mamadou Sakho found the post after sensational wing play from Sterling, before Martin Skrtel smashed the loose ball over from the edge of the box.

Tottenham tried to exert some pressure on Liverpool, but it was short-lived. Paulinho was sent off in the 62nd minute, after a late and high boot on Suarez's chest.

There was no way back for the hosts following that dismissal, considering the Reds' dominance in the clash.

Liverpool were rewarded for their constant pressing and probing. Henderson embarked on another fine run from deep and played a clever backheeled nutmeg to Suarez. He directed a cross to the back post, where Flanagan sent a robust volley in off the woodwork.

On 83 minutes, it was the Suarez show again, the striker doing the armband proud as he lofted a perfect finish over Lloris to make it 17 for the season.

The Reds were not done yet, though. Suarez turned provider and helped Sterling get the reward he deserved in an emphatic 5-0 victory, which lifted the Reds to second in the Premier League standings, just two points adrift of leaders Arsenal.