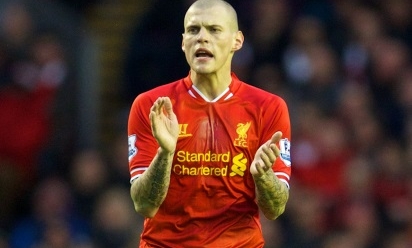 Fancy playing at Anfield next year?

Brendan Rodgers now considers Liverpool defender Martin Skrtel to be among the finest centre-halves operating in the Barclays Premier League after the No.37 'proved the manager right'.

The Slovakian found himself out of the starting XI during the second half of the 2012-13 season - Rodgers' first as manager - and initially kicked off the current campaign among the substitutes.

Since being handed an opportunity to impress in the home victory over Manchester United on September 1, however, Skrtel has been selected to start every single match by the Northern Irishman.

"Last year I felt he was rash and made mistakes. Now he's arguably one of the best centre-halves in the Premier League.

"He's composed, he looks bigger on the pitch and he's been brilliant during this run he's had in the team, so hopefully that will continue. He's another international captain who's still improving."

Continuing on the theme, Rodgers said: "Jordan Henderson is somebody else who I think has made progress. So I see improvement in the players, but that's down to them.

"As coaches and managers we are tools to make them better - the key is whether they want to learn and thankfully I have a tremendous group of players who have a real hunger to succeed and hopefully they feel they're getting better.

"I would like to think that if a player has the right mentality, he can always learn. That's from the youngest players to the senior players.

"I've seen development in Steven Gerrard - you can look at his pass completion rate now and his ability to dictate the game. You still see his quality.

"He still has the qualities to dictate a game but I can see his maturity all the time and that comes from his experience and his ability to learn what we're trying to do."

Rodgers takes his team to White Hart Lane on Sunday to face Tottenham Hotspur, with the second-placed Reds seeking a third consecutive victory in the Premier League.

The fixture kicks off a period which sees the 40-year-old's side travel to Spurs, Manchester City and Chelsea before the conclusion of 2013 - when the staff can take a measure of the club's progress.

"We break it into chunks as I think it's difficult to review it regularly over the course of 38 games," added the boss. "We wanted to make a good start and after 10 games I think we could say it was a good start.

"There are four games from Tottenham away to Chelsea away, which takes us to the end of the year and the 19-game mark. By the halfway point we'll have played everyone else and have a greater measure of where we're at.

"I think it's important to look at your goals that way and strategically try to map things out. It's very difficult to forecast because you never know what the opposing team will bring.

"What you can do is try and prepare so that you bring your 'A game' to each fixture. And if we can bring our 'A game' into the majority of our fixtures, we will win them.

"What we have in the team now is resilience. In my time here we've never lost two league games on the spin and that's a factor in the consistency and winning mentality that we're trying to build.

"Whenever you fall, you need to get up as quickly as you can and go again. The way we've done that is something that has pleased me.

"I'm pleased with the progress because we've sat second in the league, but while there's space up above us we'll continue to fight."