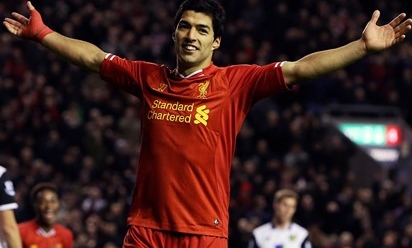 Brendan Rodgers believes Luis Suarez's ability to consistently inspire those around him to find an improved level of performance marks the Liverpool forward out as a truly great player.

The Uruguayan dazzled a floodlit Anfield on Wednesday night with a magical display against Norwich City which will be talked about on Merseyside long after the No.7 has hung up his boots.

He broke the deadlock with a sumptuous volley from 40 yards, added an accurate close-range finish and a unique dribble and drive into the bottom corner, then concluded with a curling free-kick from distance.

Suarez's four-goal haul carried the 26-year-old to the top of the Barclays Premier League scoring charts, having now registered an incredible 13 goals in just nine appearances during 2013-14.

With a day to reflect on the events that unfolded at the home of the Reds last night, the manager explained on Thursday why his talismanic striker should be considered alongside the game's elite.

He told reporters: "People always talk about someone being a great player. The only way I can define a great player is when he makes the others around him better.

"You have many good players, many really talented players, but the best in anything, whatever sport it is, the greatest ones will always make the others around them better. That's what Luis Suarez does. He's a great player, he inspires others.

"To think he actually had a tight calf before the game, but yet wanted to get out there and play like he did. He has had that a few times; before Wigan away last year, his hamstring was a bit tight and he got a hat-trick that day.

"He really makes others around him better - for me, that's the mark of the great players, and the difference between good and great.

"He loves it. He hates getting taken off, even if it's for a round of applause. He's just a brilliant guy to work with, to see that determination every day in his work and the hunger.

"What's also brilliant to see is the reward he gets from it. It's truly inspiring for the other players to be around that, but he has that humility to keep wanting to improve.

"Let's hope he can keep producing, he's a very important player, great for this league and obviously it's a pleasure to work with him here at Liverpool.

"He deserves all the acclaim he gets because it was an absolutely wonderful performance. If he's going to be here for a long time, he's got a great chance of establishing himself as one of the greats of this football club."

Journalists at the boss' pre-match press conference asked whether the Northern Irishman was in agreement with that assessment, and he backed his captain's judgement.

"Those two, consistently for a few years, have been up there on their own. But you can certainly put him in the bracket of world-class," said the 40-year-old.

"There's absolutely no question about that. He's still young enough; he's 26 years of age and he's still got his best years ahead of him, for me. He's an incredible talent and so humble about it as well.

"He was talking this morning that he probably got a bit of luck with the goals, which was never the case - it was just sheer magic and brilliance. After the game, you see him in the lounges at the club mixing with supporters and former players, taking his time to sign everything.

"He's just absolutely loving life here at Liverpool at the moment, and you can see that in his game. He's certainly up there with the top players in the world at this moment.

"Luis is extremely happy here at Liverpool. He certainly feels vindicated for staying and wanting to be here. This is the perfect club for him; the whole profile of Liverpool suits Luis down to the ground and hopefully in the coming years he can achieve everything that he wants to achieve - which is to play at the top level of the game.

"His talent deserves that and this is a club that deserves that, but we have to work our way there. With players like Luis Suarez here, that's going to give us a great chance.

"His behaviour, his mannerisms, his maturity and his performance level tells me, along with speaking to him, that he's very happy here at Liverpool and in the Premier League. He's playing remarkably well and consistently well."

Liverpool's 5-1 victory over the Canaries was the perfect response to suffering defeat by Hull City on Sunday, and injected fresh confidence before West Ham United visit Anfield this Saturday.

Rodgers added: "It was nice for the players after the Hull game, and for the supporters as well. That would have been a difficult one for them, we were disappointing against Hull.

"But this club has shown in my time here that our response and how we react to defeat is crucial - you've just got to keep going, you can't dwell on it for too long.

"We had the perfect response last night; I know the supporters really enjoyed it, wonderful goals and three points that we wanted to get."

Relive Luis Suarez's incredible, four-goal performance against Norwich City – including his wonder strikes from 10 angles, LFCCTV plus a compilation of his trebles past the Canaries – by becoming an LFC TV Online subscriber. Click here for more information.