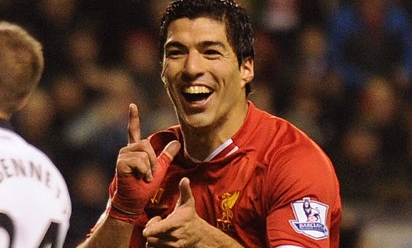 Luis Suarez made Liverpool history by pulverising Norwich City with an unforgettable four-goal haul to lead the Reds to a 5-1 victory in the Barclays Premier League at Anfield on Wednesday night.

Suarez's rocket of a volley from extra-long range broke the deadlock on 15 minutes and the unstoppable forward further increased the Reds' advantage with an accurate conversion shortly before the half-hour.

Five minutes later, the talisman sumptuously found the back of the net from distance again to claim his third different treble against Norwich - in the process becoming the first Liverpool player ever to notch three league hat-tricks past the same club.

With a quarter of an hour remaining, the Uruguayan added icing to the tastiest of cakes with a pinpoint free-kick from 25 yards which sailed perfectly into the roof of the Norwich net for his 13th Premier League goal in just nine appearances.

As the game petered out, Norwich claimed a consolation when the hard-working and creative Nathan Redmond delivered into the middle for Bradley Johnson to glance a header past Simon Mignolet, before Raheem Sterling added a fifth for Liverpool.

Norwich midfielder Jonathan Howson whipped a well-executed volley high of Mignolet's top corner during the opening exchanges, before Coutinho brought the first gasps of expectancy from the Kop towards which the home side were attacking.

The Brazilian pounced on loose possession in a central area and danced around three challenges to train his sights on goal with a slightly scuffed, left-footed attempt - Sebastien Bassong covered swiftly, however, to block.

Playing in a similar position for the visitors was Wes Hoolahan, who troubled the Reds in the ninth minute when he burst ahead of Allen and tried his luck with a bobbling strike at the bottom corner which Mignolet collected coolly.

Jordan Henderson directed wide from inside the Canaries' penalty area following typically battling work by Suarez, and the No.14 produced the same result moments later when he swiped a shot wide after being played in behind by a clever Glen Johnson pass.

Then Suarez, as he so often has against Norwich since arriving in England, stole the breath of everyone in the stadium; with seemingly no danger around for the away side, the Uruguayan beautifully blasted a volley from around 40 yards up and over John Ruddy and into the top corner.

Liverpool sensed the chance to improve their hold on proceedings and, on 29 minutes, it was 2-0. Steven Gerrard stooped low to expertly flick on a corner from Coutinho and Suarez smoothly diverted a volley past Ruddy.

Mignolet comfortably held a low free-kick from Redmond as Chris Hughton's team searched for a response, but any hopes the Canaries had of leaving Anfield with any points vanished 10 minutes before the break.

Again Norwich failed to stop Suarez as he bore down on goal through the middle and, after cutely lifting the ball over his marker, the 26-year-old drove a clipped effort piercing through the air and around the outstretched arm of Ruddy for 3-0 and an historic hat-trick.

When the two sides resumed the action after half-time, it was the visitors who created the first inviting opportunity, although Bassong could only power a header over the crossbar when picked out by a Redmond delivery.

At the other end, Henderson was fouled but Coutinho's subsequent set-piece rolled harmlessly across the ground. Ruddy was then quickly forced into a reaction stop when Gerrard nodded a header goalwards from Sterling's dinked centre.

Jon Flanagan threatened with a foray down the left and ambitious volley, Sterling had to settle for a corner when he concluded a rapid counter-attack with a shot, and Allen saw his dipping drive acrobatically tipped over by Ruddy.

The impressive Redmond sent a fizzing attempt the wrong side of the near post from the left flank, but Norwich still had to worry about Suarez, who spun just on the hour, dribbled through and fired an effort across goal which the Canaries 'keeper denied with fingertips.

He then assisted his captain, whose side-footer from the edge of the area was caught smartly by the overworked Ruddy. Spanish midfielder Luis Alberto was handed a 20-minute cameo by the boss when he replaced Henderson.

With 15 minutes left on the clock, Suarez added his name to the scoresheet for a fourth time, guiding a precise free-kick over the Norwich wall and expertly into Ruddy's net to increase the scoreline in Liverpool's favour.

Redmond refused to give in for Hughton's charges and flashed a strike beyond Mignolet's far post, before planting a cross onto Johnson's head for the midfielder to claim a consolation with 82 minutes played.

There was still time for Gerrard to attempt an outrageous flicked effort which bounced away off the post, although Sterling was on hand to complete the scoring in the 88th minute with a clever finish from Suarez's assist.