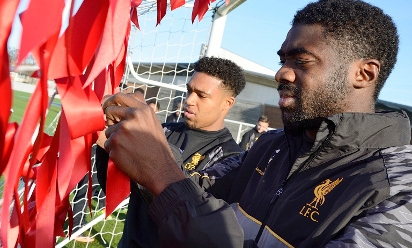 In partnership with Standard Chartered, the campaign will feature a series of activities geared towards raising awareness about HIV and AIDS - including a special e-Booklet, which you can view now, by clicking here.

Liverpoolfc.com sat down with Mark, who has been integral in co-ordinating the week of action - and he talked us through the reasons behind the club's commitment to the intitiative.

Mark, tell us why Liverpool FC are supporting a week-long campaign dedicated to World AIDS Day...

HIV and AIDS is a major, global issue. Our main shirt sponsor, Standard Chartered, take a particular interest in the issue and they have an excellent education programme which aims to tackle HIV and AIDS. There are more than 100,000 people in the United Kingdom who are suffering from HIV and AIDS, and so what we're looking to do, along with SCB, is to raise awareness around that, not only in the UK, but around the world, as it is a global issue and the club has a global reach.

What sort of commitment does Standard Chartered make to World Aids Day campaigns?

Standard Chartered have been dedicated to this issue for more than 14 years. As a company, they realised some time ago that the countries they were working in and the people they were working with in the local communities had been negatively impacted by HIV and AIDS. They launched a programme in Africa in 1999, with an aim to support and protect the local community and some of their own employees. They centred their programme on education and the key messages of prevention. It started in Africa all those years ago because that was a place where HIV and AIDS were prevalent - but Standard Chartered has expanded their educational programme since then. They've expanded it across their global network to reach out to more people worldwide.

Tell us about the work Liverpool FC carry out in the community to inform and help people about the issues related to the World AIDS Day campaign...

The Liverpool FC Foundation do not have a specific HIV and AIDS programme, but it is a subject that we refer to quite a lot in programmes like our mens' health scheme. We will circulate information as part of our healthy lifestyle and sexual health advice. But what we do as a Foundation is support and give profile to the local NHS initiatives, which are focused on those preventative messages relating to HIV and AIDS. I think the main one being that if you do feel you have any potential for being infected, you go and seek advice from your doctor or GUM clinic straight away.

Last year's activity surrounding World AIDS Day was ground-breaking. Tell us about the success of those activities and the impact they had...

It was phenomenally successful. I think it was the first time a football club had given such a high profile to World AIDS Day. We unveiled a 49-metre ribbon on the pitch at Anfield, opened up by players and staff at Standard Chartered, alongside workers from HIV charity, AVERT. That was such a high-profile initiative and it was an iconic photograph. It went to such lengths in raising awareness around HIV and AIDS. It brought the message of the campaign to such a high level. As a public health awareness initiative, it was phenomenal. Just recently, the campaign has won a number of awards, as have Standard Chartered for their role in the campaign. It's all about using the power of the Liverpool badge to give profile.

This year we have more activity planned - firstly, we saw yesterday that the players at Melwood tied ribbons to one of the goal-nets. What is planned for the rest of the week?

The players are role models in so many respects and so I think to have their support for what remains a sensitive issue, is essential. It gives the campaign that credence and profile. This year, we had a challenge to outdo last year and to produce another iconic photograph. So it's going to be interesting, because from what I understand, we are going to have a red ribbon projected onto the Kop on the night of the Norwich game. And I think that's going to look fantastic. It's going to be something many people will not have seen before and it will stimulate quite a bit of discussion amongst the fans and the media. So I think it's going to give the campaign that high profile once again. It's all supported by the fact that the players will warm up on the pitch wearing T-shirts with those preventative messages around HIV and AIDS. As a club, we're really putting our backing behind this campaign, which is fantastic to see. I know the local NHS are really pleased with the work that we're doing and I think it does show that we care about communities, both locally and nationally.

What does the club hope to have achieved by the end of our week-long World AIDS Day campaign?

I'd like to think the week will have shown the strong partnership between the club, the Foundation and Standard Chartered. All three have come together to produce what is a fantastic response and an important campaign. I certainly think that response will lead to high-profile exposure of the issues surrounding HIV and AIDS. The whole thing will further continue the work that Standard Chartered carry out in terms of education around the world. People can go to the match and see the ribbon on the Kop, they can discuss it with their friends and colleagues, they can see the players warming up. Then they can log onto the website and download the e-Booklet which Standard Chartered have put together.