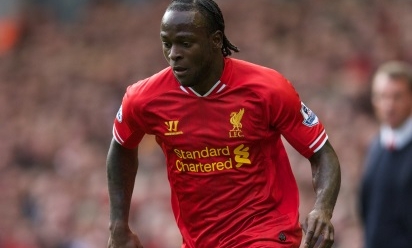 Mignolet: The onus is on ourselves

Liverpool are currently averaging exactly two goals per game in the Barclays Premier League and Victor Moses has delivered a piece of bad news for defenders throughout the division: there is more to come.

Catapulted by the exploits of Daniel Sturridge and Luis Suarez in front of goal - the duo have each struck nine times in the league in 2013-14 - the Reds have notched 24 in 12 matches so far this season.

Moses, who on Tuesday was named Nigerian Footballer of the Year, has contributed a single effort to date but expects the prolific displays of Brendan Rodgers' attackers to continue in the coming weeks.

"We can score more goals because we have got two prolific strikers," the 22-year-old told Liverpoolfc.com.

"We can score two or three goals in every game because we have got enough quality players to do that. We've been doing well so far, we just want to keep working hard in training and the games to score as many as we can.

"I just want to score goals. I wanted to score around 20 goals this season. We've still got lots of games to go so hopefully I can get up to that target. I think I've got the ability to do that so I'm looking forward to every game.

"We've got enough quality players to win games this season. Everyone is working hard together as a team. That's what we need. We've got a good 'keeper as well, who has been helping us.

"We just hope everyone is fit for every game that we play. Hopefully we can win as many games as we can to stay in the top four."

The No.12 received his honour after significantly contributing to his country's success at the Africa Cup of Nations earlier this year, in addition to the Super Eagles' qualification for the World Cup.

He reflected: "It means a lot to me. I was very honoured and excited when I heard the news. I think I've had a great year, particularly with the Super Eagles of Nigeria and the Africa Cup of Nations.

"I've dug in and worked hard for the boys. It's not just for me, it's for the other lads - the award goes to them as well. I really appreciate it and want to say thanks to everyone."

Since marking his Liverpool debut with a stunning solo effort at Swansea, the on-loan forward has been fielded in a variety of positions, both central and wide, by the manager.

Versatility is an attribute the Nigerian international is more than happy to possess, particularly if it improves his chances of cementing a place in Rodgers' starting XI.

"Wherever the manager is willing to play me, I'm excited to play there," he continued.

"I can play out wide, as a striker or anywhere up front, as long as the manager puts me in there to play. I'm ready to do the job for the team.

"I'm enjoying it here, it's a massive club. We're doing well at the moment; we just want to keep the momentum going.

"We just want to stick together as a team and do what we've been doing, take each game at it comes, enjoy it and keep on winning games.

"I want to keep working hard in training and doing what I'm good at, which is working hard for the team. When I first came, I was starting.

"Now, the manager has got a different view and he wants to mix things around a little bit. I just have to be patient until my time comes. I'll kick on from there and help the team."

Moses was introduced for the final quarter of Saturday's breathtaking Merseyside derby, when the Reds salvaged a 3-3 draw courtesy of Sturridge's last-gasp equaliser.

Having been in the Chelsea squad which lifted the Europa League trophy at the climax of 2012-13 and hoisted aloft the Africa Cup of Nations title, how did a Liverpool-Everton clash compare?

The forward concluded: "It's a lot different in derby games. The two teams want to know who the better side is.

"It's a lot more exciting; the fans, the players, everyone is eager to go out there and win the game.

"Everyone is looking forward to the game on Sunday, particularly because the Everton game was a great derby.

"We equalised through Sturridge, he came on and scored a goal - he has been on fire for us this season. Not just him, Suarez as well.

"We have got two prolific goalscorers in our team at the moment, so we're very balanced. It was a great game on Saturday."