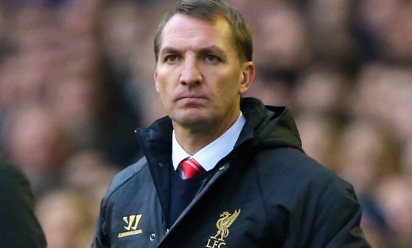 Brendan Rodgers took pleasure from the 'resolve and spirit' displayed by his team after Liverpool secured a late 3-3 draw from a truly unforgettable Merseyside derby at Goodison Park.

After twice taking an advantage over city rivals Everton, through Philippe Coutinho and a trademark Luis Suarez free-kick, a second-half brace by Romelu Lukaku stunned the visitors.

But Daniel Sturridge joined the action as a substitute and left an indelible mark on the occasion by flicking an inswinging Steven Gerrard free-kick perfectly into the top corner.

Post-match, the manager admitted his disappointment that the Reds had twice squandered a lead, but pointedly noted the character shown by his side to nevertheless salvage a dramatic point.

Rodgers told reporters: "My heart has just stopped! It had everything in it; there was quality, I was happy in moments and there was disappointment.

"When you come away to one of your rivals and play like we did for parts of the game, and also show the character and mentality to come from behind towards the end, it tells me everything about where my group is at.

"We're disappointed as well because we were 2-1 up and should have gone to 3-1 - that would have allowed us to control the game much better.

"After that, we went through a period of about 12 minutes where we just gave the ball away needlessly. We needed to show greater control of the game.

"That handed it back to Everton and they ended up getting an equaliser; we marked poorly and weren't strong enough on the corner, and Lukaku gets his header.

"At 3-2, you're thinking that from a game we should never be behind in against a rival, we need to show our resolve and spirit. That's what we did.

"A point away from home against a rival is always a very good result. But obviously we'll look at it and think that it's a game that, with a bit better control, we could have won."

Simon Mignolet was called upon to make a number of important saves during the second period, notably denying compatriot Lukaku and Spanish youngster Gerard Deulofeu from close range.

"He was brilliant and that's why we brought him here - he makes saves," the boss continued.

"There were a couple of moments on breakaways and he's a brilliant one-on-one goalkeeper, he's superb. When he was asked upon today, I thought he was excellent."

The Northern Irishman was questioned about an incident in the first half, when Everton attacker Kevin Mirallas was shown a yellow card for a late tackle on Suarez.

He responded: "I thought he should have been sent off. I've seen Mirallas for a few years and he looks a really honest player, and a good attacking player.

"Sometimes the attacking players make challenges that are poor. But that was a really bad challenge. I thought it was a brilliant game, we don't want to spoil it.

"I knew it was reasonably bad when he stayed down for that long and the medics were working in and around him. He's a player who can look after himself on the field. He's a strong player, don't worry about that."

Suarez increased his Barclays Premier League tally to nine goals in seven appearances with his set-piece conversion against the Blues, and almost achieved a winner in stoppage time.

His impressive performance followed a quick-fire return from international duty, having represented Uruguay in World Cup qualifying on Wednesday evening, and Rodgers believes few could match him. 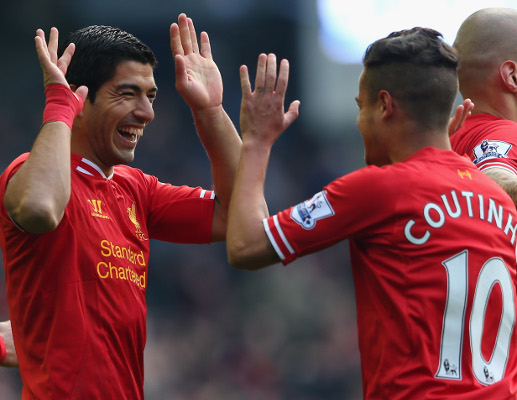 "His will and determination to play in a football game is unbelievable," he said.

"When we were looking at the plans for him to play against Fulham, the two qualifiers and then this game, it was very clear he wanted to play in every one.

"He didn't want to miss the Fulham game - he wanted to play in every game. He's just remarkable. He got back late on Thursday night, trained yesterday and surprisingly looked really fresh and fine in training.

"He was fine. I know the player well and know what he gives me. Having only one striker last season for the first six months gave me a great idea of what his mentality is like.

"I know that even sometimes if he is not playing so well at the end of a game, he can still get you something - and he nearly did [today] with a brilliant shot and brought a good save out of Howard.

"He's a player that goes to the limit every game, so I had no doubts."

Like his strike partner, Sturridge was also on international duty in midweek - completing 90 minutes in England's friendly defeat by Germany - and Rodgers revealed why the No.15 started from the bench on Saturday.

The 40-year-old added: "His first action on the field was on Friday. This is a game where you need every single player fighting and working and, on assessment, he wasn't going to be able to do that.

"I said to him before the game, at the team meeting, that he has been a hero and match-winner for us when he starts since he has been in - today he might have to do it from the bench.

"Thankfully, he came in and got a great header. He'll have a good week's training next week and be back in contention to start next week."