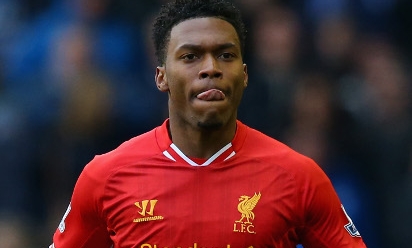 Bragging rights on Merseyside will have to be shared after Daniel Sturridge scored a dramatic late equaliser to claim a 3-3 draw for Liverpool against Everton in an action-packed Merseyside derby at Goodison Park.

Philippe Coutinho broke the deadlock with a conversion at the back post, before Everton responded immediately through a clever goal by Kevin Mirallas as the ball fell kindly at the back post.

Suarez fired a sensational set-piece into the bottom corner from long range, but Lukaku found the target with a calm finish and later a powerful header to shock the visitors.

Substitute Sturridge had the last say and salvaged a dramatic point, however, by glancing a beautiful header into the top corner from Steven Gerrard's pinpoint set-piece.

Brendan Rodgers had made two changes to his starting XI against the Blues, with midfielder Joe Allen replacing Sturridge and young defender Jon Flanagan entrusted with the left-back position.

It was the home side who made the faster start, forcing a high tempo in the opening exchanges; James McCarthy, in particular, threatened with a lung-busting drive from the centre of midfield.

But in the fifth minute, the Reds struck. Gerrard curled a corner into the Everton penalty area, Suarez flicked on the delivery and there was Coutinho to control and force into the back of the net from close range.

The lead was short-lived, however, as Mirallas produced an instant response for Roberto Martinez's team on eight minutes. The Belgian latched onto a loose ball in the Liverpool box to flick an improvised effort past the hand of Simon Mignolet and into the top corner.

Four minutes later, the Reds stopper had to react quickly to rush from his goalline and thwart international teammate Lukaku as the powerful striker rushed in behind the away defence.

As the action calmed to a degree, Rodgers' charges earned a stronger element of control on proceedings, enjoying greater possession - and that was reflected in the scoreline on 19 minutes.

Suarez won his side a free-kick in an inviting central position and a quiet descended on Goodison Park as the Uruguayan stood over the ball; suddenly, there was ample noise in the away section when the No.7 curved a sublime shot into the bottom corner.

Back came Everton and Mignolet was required to sprawl to his left to push a sweeping Ross Barkley attempt around the post, before Mirallas trained his sights from distance only to send an arrowed strike too wide.

The pace was unremitting and Mirallas could consider himself somewhat fortunate to avoid a red card for a high challenge on Suarez shortly after the half-hour mark. Referee Phil Dowd deemed a yellow to be sufficient.

A scrappy period of play, which seems a pre-requisite for any derby, occurred when the action resumed for the second half, although Everton were again the team forcing the issue as they searched for an equaliser.

Martinez introduced Gerard Deulofeu for Leighton Baines and the Spaniard was released into huge space by a precise Mirallas through ball, but an outstretched boot by the alert Mignolet ensured Liverpool's advantage was preserved.

Joe Allen had his head in his hands on 59 minutes when Suarez bulldozed through the Blues' defence and allowed the ball to role free. The Welshman seemed to have the simplest of finishes but directed his effort wide of Tim Howard's post.

By this point, the encounter was the definition of end-to-end and, on 64 minutes, Mignolet saved his teammates again by rapidly scurrying out and blocking a clipped dink by the prolific Lukaku.

Barkley slipped Lukaku into the right-hand channel and the Belgian tried a side-footer which the Liverpool 'keeper was equal to, while Victor Moses replaced Allen as the Reds looked for increased width.

But in the ongoing battle between Mignolet and Everton's No.17, Lukaku finally found some joy. After his own blasted free-kick was stopped by the goalkeeper, the home striker capitalised on a goalmouth scramble to place the ball into the net.

With 12 minutes remaining, a whipped cross by Gerrard presented Suarez with a clear chance to head home but Howard punched away the effort with a reflex save. Rodgers responded by entering Sturridge into the action.

Mignolet denied Deulofeu twice in succession as the Spanish youngster raided down the left channel, and from a subsequent corner, Lukaku rose highest to power an unstoppable header into the Reds' net.

Remarkably, with a matter of seconds left on the clock, Gerrard produced an outstanding free-kick delivery which Sturridge leaped and glanced into the top corner to rescue an incredible point for Liverpool.

There was still time for Suarez to test Howard, Sturridge to have a goal correctly ruled out for offside and Mignolet to yet again keep Deulofeu at bay, before the referee finally stopped thousands in attendance from stressing by blowing the final whistle.