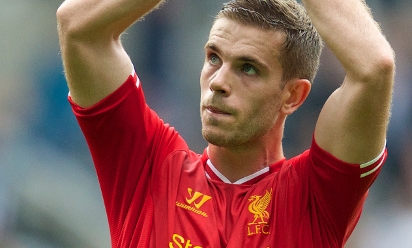 Jordan Henderson is determined to extend his fine Merseyside derby record when Liverpool travel to Everton on Saturday.

Since arriving at the club in June 2011, the midfielder has locked horns with the Blues on five occasions - and he's yet to taste defeat.

His debut season saw the Reds claim a league double over their rivals as well as a memorable Wembley triumph in the FA Cup semi-final.

After draws home and away last time around, Henderson is keen for Brendan Rodgers' side to claim all three points in this weekend's eagerly anticipated encounter.

"The derbies are always fantastic games to play in," Henderson told the Liverpool Echo. "They've gone pretty well for me so far and hopefully that will continue.

"Both sets of fans are very passionate and that always makes for a brilliant atmosphere.

"As a player, these are the kinds of games you want to be playing in. We know how much a win means to the fans.

"I played in the North East derby when I was at Sunderland and the intensity is very similar.

"There is no getting away from the fact that it's a big game. I'm really looking forward to this one at Goodison.

"We are going there in good form. We want to carry on where we left off before the international break.

"We've got a couple of days' training now to get ready for the weekend and to ensure we're ready to fire again."

While Liverpool have propelled themselves to second in the Barclays Premier League table following seven wins in 11 matches so far this season, Everton are not far behind.

Roberto Martinez's men sit sixth in the table and have not lost a game at Goodison Park since December 2012.

However, Henderson is relishing the challenge of bringing that record to an impromptu end - and he insists there's plenty of confidence around Melwood heading into the clash.

"Everton are a brilliant team with some really good players," said the England international.

"They have done really well so far this season and have beaten some big teams, including Chelsea at home.

"They have got a very good home record and they work well as a team. We have to make sure we don't allow them to build up momentum early on.

"We need to be right on top of them from the start and keep playing the kind of football we have been playing.

"We will look forward to the challenge. We certainly feel like we're good enough to go there and get a positive result. It would be a big statement if we could win there."

Having helped Uruguay seal their place at next year's World Cup finals with a 5-0 aggregate win over Jordan, Luis Suarez will be available for selection at the home of the Blues.

Suarez has struck three goals in four appearances against Everton since joining the club two years ago - two of which came at Goodison Park and one in the semi-final at Wembley.

In the previous encounter between the sides, which ended 2-2, the striker was denied a last-minute winner when he turned home Sebastian Coates' knock-down, only for the goal to be ruled out.

Henderson insists his teammate will be desperate to put the Blues to the sword once again at the weekend - and believes there will be no side-effects following an international appearance midweek.

"To be honest, Luis could arrive back Saturday morning and go straight to Goodison and he would still be ready to play - he's that good," Henderson said.

"I'm sure Luis will be ready for the derby. All the travelling won't bother him at all.

"I'm sure he will get plenty of sleep on that plane back from Uruguay and he will be raring to go against Everton."

The recent international break saw Henderson return to the England set-up for the friendlies against Chile and Germany at Wembley.

He earned a sixth and seventh cap for his country with two substitute appearances, but the 23-year-old was powerless to prevent the Three Lions from falling to consecutive defeats.

Henderson, however, believes he will benefit from the experience and his target is to be in the frame again when Roy Hodgson selects his squad for England's final World Cup friendly against Denmark in March.

"I really enjoyed being back around the squad," added Henderson. "Getting to know all the lads and getting some football as well was pleasing.

"It was obviously a disappointing result against Germany but for me personally it was nice to get out and have a taste of international football again.

"In the first half we started really well and were unlucky to go in at half-time 1-0 down. In the second half we kept going and kept trying to get back into the game but it wasn't to be.

"I don't think there's a huge gulf between England and the top teams. We have some world-class players and you saw that against Germany with how we started the game. We played some great football at times.

"We just have to keep building ahead of the World Cup and keep working hard when we come together.

"I just have to learn from the experience and hopefully kick on at my club. If I do that then hopefully come the game against Denmark in March I'll be back in the squad again.

"The key for me is doing well for Liverpool. That starts with a big game against Everton on Saturday."