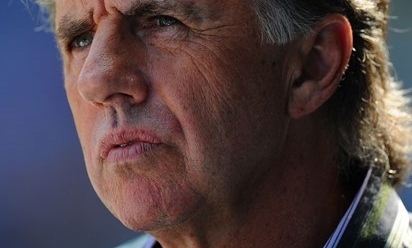 Former Liverpool defender Mark Lawrenson expects the openness of the current Barclays Premier League season to provide the Reds with their 'best chance' of returning to the top four.

Just six points separate the top eight teams in the standings before action resumes this weekend following the international break, with Liverpool sitting in second place behind Arsenal.

After winning seven of their opening 11 fixtures, Brendan Rodgers' team could take top spot - temporarily, at least - if they emerge triumphant from Saturday's Merseyside derby.

For Lawrenson, who won 10 major trophies during his seven years at Anfield, six teams are in contention for four Champions League spots, and his old team are definitely among them.

"I think this is our best chance for a long time," said Lawrenson in the latest edition of #LFCWORLD.

"It's going to be a massive scrap; there are six teams for the top four. When I looked at it just before the start of the season, I thought we were going to struggle to get into the top four.

"So far, it has gone extremely well. There was the odd hiccup, with the Southampton result at home, and maybe we should have got at least two extra points against Newcastle with them down to 10 men after 40 minutes.

"It's a long season. The Premier League is so open this year, I think we've got a really good chance of finishing in the top four."

The television pundit also shared his impressions of the work carried out by Rodgers since the Northern Irishman was appointed manager in the summer of 2012.

Lawrenson considers the current Liverpool side to have improved in comparison to the one Rodgers inherited 18 months ago, praising the boss' decisions in the transfer market.

"Since he became boss, Brendan has improved the team," the 56-year-old commented.

"You are always going to sign loads of players - some will work and some won't work. But Coutinho and Sturridge were inspired signings. He has got Suarez playing as well, which is fantastic."