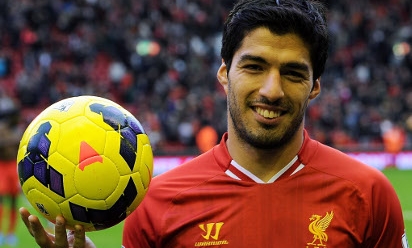 Luis Suarez has pipped the likes of Wayne Rooney and Mesut Ozil to be named as the PFA Fans' Player of the Month for October.

Liverpool's No.7 fired four goals during, including a magnificent hat-trick against West Bromwich Albion last week, and has been on fire in a blossoming front-line partnership with Daniel Sturridge.

Sturridge also earned his fair share of votes during the month, but was edged out of the top three with Rooney and Ozil behind Suarez.