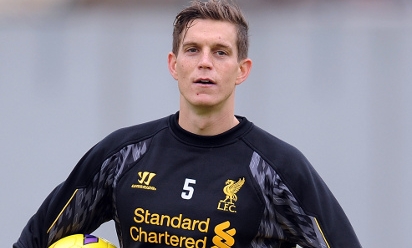 Brendan Rodgers believes Liverpool are reaping the benefits of increased competition for places within the squad – and praised Daniel Agger's determination to win a place back in the starting XI.

The vice-captain has not started since Southampton visited Anfield on September 21 - a game in which he was forced to be substituted due to injury.

However, Rodgers insists Agger has been working hard at Melwood in an attempt to force his way back into the team and it's that kind of attitude, the manager believes, has given the Reds an extra edge so far this season.

"I've reassured him and Daniel is one that understands fully the situation," he told reporters at Melwood. "He's like every player, of course, and he wants to play and he's a top player.

"He's training remarkably well. It's obviously been difficult because since he came out of the team with that injury against Southampton, the team has done very well.

"It's something he understands and he's come in [to training], has a smile on his face and is working exceptionally well.

"That's what we need because it's going to be the whole squad that allows us to succeed - and he's a player that respects the decision.

"He's fighting and waiting for that moment, and when he does get back in he'll be in there to fight to keep his place."

Liverpool's summer transfer activity saw them recruit no fewer than eight new faces, significantly bolstering the options available to Rodgers in the process.

The Northern Irishman admits juggling his squad can be tricky, but it's a task he relishes.

"I talk with the players with individuals and as a group," said Rodgers. "The biggest thing is identifying - and for them to recognise that you're aware of - how hard they're working, and how difficult it is.

"These players, players like Daniel Agger, Joe Allen, Luis Alberto, Raheem [Sterling] and boys like that, they're working tirelessly.

"Sometimes we're having to organise games behind closed doors, like we did the other day, to keep them up to some sort of match fitness.

"It's something that's part of my management. Every player here for me is very important. It's also part of being a professional.

"Football is unique. Everyone talks about football being a business, but I don't know any other business where you have 25 in an office, but you can only pick 11 once or twice a week. There are not many offices like that!

"Football is unique. The principles can be the same, but in terms of that side of it, it's totally different - but that's my job, that's my problem and I manage it the best I possibly I can."

Rodgers added: "You look at some of the other squads around. Look at the Chelsea team playing the other night [versus Arsenal], that starting XI would arguably be in with a chance to win the league as well.

"They've got a different 11 players that can come in, and that's what brings you that success. You have to have players fighting so that they know when they play, they have to be at their best.

"That's something we're developing here. We've got a long way to go to get to that level, but it's certainly something that's improving all the time."