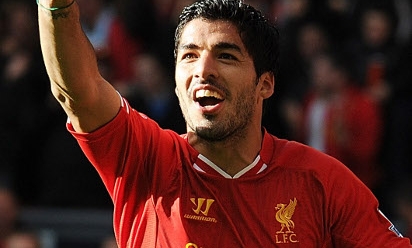 Luis Suarez showed off every skill in his extensive repertoire to inspire Liverpool to a 4-1 victory over West Bromwich Albion in the Barclays Premier League on Saturday.

The 26-year-old fired his side into a rapid 2-0 lead with an individual shimmy and accurate finish, which was followed by a scarcely possible header with immense power from the edge of the area.

A second header followed at the beginning of the second half to seal the No.7's sublime hat-trick and a James Morrison penalty for the visitors proved mere consolation.

For Daniel Sturridge produced an astonishing, 25-yard chip to allay any fears of a comeback as the Reds gained a measure of revenge over opponents who had achieved a frustrating double over Brendan Rodgers' charges last season.

The pre-match team news revealed that Rodgers had made just one change to his Liverpool starting XI, with Brazilian midfielder Lucas Leiva brought back into the team to replace Victor Moses after missing the previous two matches.

The first attempt of any note arrived from the right boot of Suarez, fed at close proximity by strike partner Sturridge, but the Uruguayan's skimming low shot carried wide of the left post in the sixth minute.

Suarez turned provider for Steven Gerrard moments later but the captain's drive travelled along almost exactly the same path, before there were loud appeals for a penalty when the No.7 fell under pressure from Gareth McAuley - nothing given.

Clearly in the mood at a sunlit Anfield, Suarez broke the deadlock after 11 minutes with a superb solo effort; the forward dribbled through a series of attempted challenges into the Baggies penalty area and calmly toe-poked a finish into Boaz Myhill's far corner.

Within six minutes, it was 2-0 - and from the same source. With the Reds making attacking progress, the ball was moved to the left, where Aly Cissokho fired in a cross from the left which Suarez arched his neck and powered unerringly into the top corner.

Martin Skrtel should have increased the advantage further midway through the opening period when a scientific set-piece arranged by Gerrard and Suarez landed plum for the Slovakian, who mishit at the crucial moment.

The unstoppable Suarez curled a free-kick the wrong side of the right post from 25 yards and Henderson was inches away from sweeping a perfect effort beyond Myhill from the left edge of the West Brom box.

Steve Clarke's team served a warning in added time of the first half, with former Reds striker Nicolas Anelka very nearly forcing a goal after evading Simon Mignolet; Skrtel, though, recovered to clear and ensure a 2-0 scoreline at the break.

Two minutes after the restart, Sturridge drilled a swerving free-kick from the right flank narrowly wide of Myhill's post, while at the other end Claudio Yacob troubled the hosts with a curler which went off target.

The three points were secured 10 minutes into the second half, when Suarez rose highest once more from a precise Gerrard delivery into the Baggies' area to glance home and celebrate a sensational hat-trick.

The visitors were under siege at this point and Sturridge ought to have added his name to the scoresheet from Glen Johnson's centre; luck was then not on his side seconds later as a thunderous long-range blast bounced back off the crossbar.

Liverpool's domination was tempered when referee Jon Moss pointed to the penalty spot as Billy Jones tumbled in the Reds area - up stepped substitute Morrison to thrash it down the middle from 12 yards.

As the game entered the final quarter-hour, Chris Brunt pulled a low strike across the face of goal from a dangerous position and then sent a snap-shot too high, before Sturridge created magic.

Striding forward in possession, the No.15 had options left and right but instead chose to claim his eighth Premier League goal of the season with an incredible chip from distance which sailed over Myhill and landed comfortably in the bottom corner.

The West Brom stopper somehow diverted an acrobatic Suarez volley onto the crossbar with a reflex save, while the ever-alert Mignolet denied Morrison a second with a reaction stop, and Suarez was thwarted by Myhill in the final genuine action of a rewarding afternoon for Kopites.