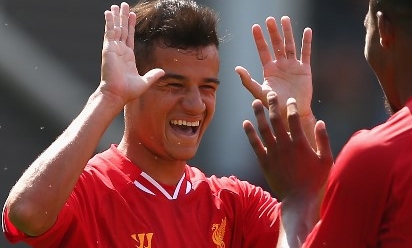 Brendan Rodgers has delivered a positive update on the fitness of midfielder Philippe Coutinho and expects the Brazilian to be available for selection against Arsenal next week.

The 21-year-old suffered a shoulder injury during the Reds' clash at Swansea City last month and subsequently required surgery to solve the issue.

But the creative No.10 is nearing a comeback, having returned to training with his teammates at Melwood this week, and Rodgers expressed his delight.

"He might just be short for this weekend," the Northern Irishman said at his pre-West Brom press conference on Thursday.

"You always miss quality. He has re-joined training with the group. He's been on the field doing a lot of physical work. He has joined in with the team on a non-contact basis.

"I think, after the weekend, he'll be fine. He has got really good strength in his shoulder now; it's just getting him up to speed in training and joining the group.

"He has been in the last couple of days and has looked brilliant, to be honest - like he has never been away with his flow and fluency with the ball.

"His work has been excellent. It's great to see him back in and it's another quality player back for us."

The manager was also questioned by reporters on the availability of Lucas Leiva after the Brazilian missed last week's trip to Newcastle due to his partner giving birth.

Rodgers said: "He's fine. It was one where last week he became a father and on top of that, he had a long travel having been with the national team.

"He was in the hospital for a couple of days and could have been available, but sometimes that can be a risk - if you have lots of travel and lots of stress, mentally and physically in the body, sometimes you can go out there and actually injure yourself.

"But he's back in and has trained really well this week. He'll be back available in the squad."