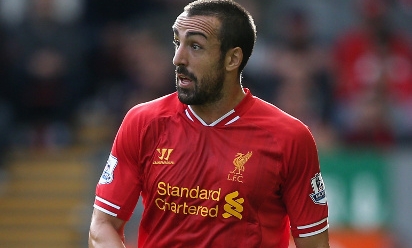 Wilson at the double as U18s win

Brendan Rodgers has revealed Jose Enrique missed Liverpool's 2-2 draw against Newcastle due to a knee injury.

The Spaniard was left out of the Reds squad that travelled to St James' Park for the Barclays Premier League encounter on Saturday afternoon.

In his place, the returning Aly Cissokho was handed a starting role for the first time since he sustained an ankle injury during the 4-2 Capital One Cup win over Notts County in August.

Rodgers told reporters in his post-match press conference: ­"Jose was injured. He's had a problem all season with his knee and he's struggled.

"In fairness to him, he's put himself out for the team to go out and play.

"But he was suffering with it and we just felt it was best for him to come out and make it right. And that coincided with Aly Cissokho coming back.

"With Cissokho and Glen Johnson, the running and the work that they put in today was brilliant, considering they had literally just re-joined training.

"The role they played [wing-back] demands that they have to get up the pitch and they've got to get back. So it's a great credit to them."