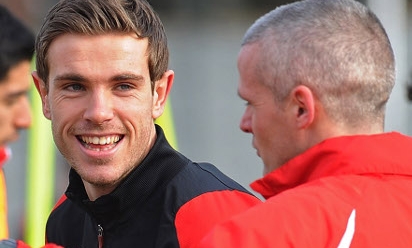 Rush: Brendan has invited us in

The newest member of Liverpool's centurion club, Jordan Henderson, believes two seasons on Merseyside have helped him develop into a more mature and experienced player.

Henderson passed the 100 mark during the Reds' 3-1 victory over his former club Sunderland on September 29.

In the following game against Crystal Palace, he pulled level with Mike Marsh's appearance tally for the club - something that has given the youngster an extra spring in his step around Melwood this week.

Asked how the Henderson of today has progressed from the one who arrived in June 2011, the midfielder replied: "I think I've grown up a lot since then and I'm more mature.

"I've improved tactically since coming here too, but I think maturity is probably the one word that I would use.

"I didn't realise I equalled Mike's appearance record. I'm surprised he hasn't said anything, but I'm sure he will. Maybe he's been keeping it quiet, so I'll mention it to him when I see him.

"But I've enjoyed the time that I've had here so far and I've loved every minute. I feel as though I want to keep going and keep improving every day. Hopefully there are plenty more games to come."

Liverpool will look to welcome back a host of injured players into the squad over the coming weeks.

Among them is Joe Allen, who picked up a hamstring problem against Notts County in the Reds' 4-2 Capital One Cup win back in August.

Henderson is looking forward to having the Wales international, who played 37 games in all competitions for Liverpool last season, back in contention for places.

"I think Joe is a fantastic player, especially with the ball," said Henderson. "Technically, he's very good and I think it's a big boost for the team, him coming back into the squad.

"His return definitely strengthens the squad. So hopefully he can have a good week's training and be ready for the weekend."