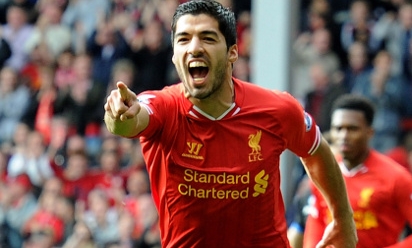 Luis Suarez achieved spectacular results in combination with Daniel Sturridge for a second weekend running on Saturday and then pledged that the pair will attempt to guide the Reds into the top four.

The Uruguayan opened the scoring against Crystal Palace at Anfield with a determined dribble and precise finish, while his striking colleague smashed home the second shortly after.

A Steven Gerrard spot-kick rounded off a 3-1 victory over the Eagles, with the three points lifting Brendan Rodgers' team back to the top of the Barclays Premier League.

"We are so happy because it's most important - here at home you need to win," Suarez told Liverpoolfc.com post-match.

"The performance was brilliant today; we played very well with possession of the ball. Maybe in the second half we were a little relaxed but it was important we won.

"When you have one big striker and a very good player in Daniel, I am so happy.

Sturridge has notched eight goals in all competitions for Liverpool since the 2013-14 campaign kicked off, including six in the Premier League.

The Reds' No.7 has wasted little time in trying to catch up - he now has three in three matches after returning from suspension - but insisted that collective targets are the primary focus for both players.

Suarez added: "We compete for the shirt of Liverpool and we try our best for the team, not for me or him.

"This season we'll try to be better. If we stay with the same football style and try for the win every game, we can try for the top four."