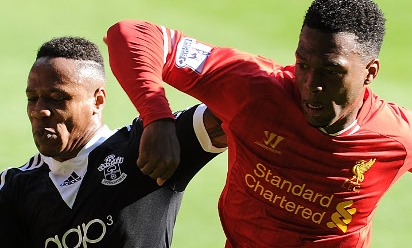 Dejan Lovren's header was all that separated Liverpool and Southampton as their Barclays Premier League clash at Anfield ended 1-0 to the visitors.

The Croatian met a second-half corner with a well-directed header to ensure the Saints travelled home with all three points secured and see the Reds lose for the first time in 2013-14.

Despite restricting the visitors to no clear opportunities in the early stages, Liverpool found chances hard to come by themselves as they were forced to try their luck from distance.

Daniel Sturridge teed up Jordan Henderson for a curling shot that soared into Artur Boruc's grasp before Lucas' long-range effort failed to trouble the Saints custodian.

Steven Gerrard gave Boruc much more cause for concern with his 30-yard free-kick that forced the Pole into an acrobatic save as Liverpool began to stamp authority in their Anfield home.

Just as the Reds intensely pressed for the opener, they were nearly thwarted in the most damaging circumstances.

A fizzing cross from the left flank took numerous deflections before falling into the path of Rickie Lambert; just as the striker swung his leg at the loose ball a last-ditch intervention from Martin Skrtel prevented the forward from firing at goal.

It didn't take long for the home side to re-assert themselves as the dominant force in the encounter and this was epitomised by an impressive solo effort from Victor Moses that the Saints rearguard failed to deal with.

The energetic winger charged his way into the area from the left wing but saw his prodded effort glanced over by Boruc.

Liverpool's frustration in front of goal continued on the stroke of half-time when the Reds came within inches of the target yet again - this time through Sturridge.

The forward met a typically dangerous free-kick from Gerrard with a flicked header that floated narrowly over the crossbar at the far post.

Southampton returned in the second half a much tougher proposition as they pressed Rodgers' side immediately after the restart.

The Reds were caught in possession deep in defence and Adam Lallana came frighteningly close to breaking the deadlock but was foiled by the trailing arm of Simon Mignolet.

The Belgian custodian was helpless to stop the visitors from opening the scoring eight minutes into the second half when Lovren met a corner with an accurate header that Gerrard was unlucky to prevent from crossing the line.

Mignolet was called upon several times soon after to ensure that Southampton didn't increase their tally.

The 'keeper expertly smothered Dani Osvaldo's shot that was destined for the bottom corner before he proved to be even more heroic in preventing Luke Shaw's solo effort.

The full-back was fortunate to see the ball ricochet into his path after appearing to lose the ball on his lengthy run but the youngster's attempt was palmed away by Mignolet, before the 25-year-old sprung back up to punch away the danger before the opposition could pounce on the loose ball.

Lively substitute Raheem Sterling raced down the right flank and drew Boruc out of his goal, allowing the winger to drill a cross towards the onrushing Henderson only to see it prevented by Lovren.

Liverpool continued to pour down the right wing, with Sturridge cutting inside but saw his curling effort soar over the bar as the Reds struggled to find the desired opening to level the scoring.

Despite the Reds' efforts to try and find an equaliser, a sturdy Southampton defence prevented them in the dying moments as Rodgers' side suffered a first defeat of the season.