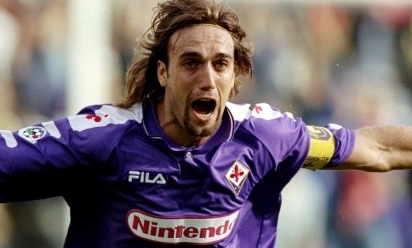 Former Liverpool manager Roy Evans has revealed how he attempted to pair one of the most prolific strikers in world football with Robbie Fowler for the Reds during the mid-1990s.

Gabriel Batistuta notched more than 200 goals in Italian football for Fiorentina, Roma and Inter Milan, scaring defences across the continent with his lethal finishing via left foot, right foot or head.

The Argentinian appeared at three World Cups and struck 10 times on the biggest stage before concluding his international career with 56 goals from 78 matches - still a record for his country.

Now it has emerged that the man nicknamed 'Batigol' had a genuine opportunity to take a diversion to Anfield midway through his successful spell in Serie A.

"There were talks of him moving from Italy to somewhere else," Evans told Liverpoolfc.com.

"We had an interest; there were some conversations between Liverpool and his club. He was interested, but unfortunately it just didn't happen.

"It was one of those things where you make an enquiry and it just didn't go any further than that. I'm sure he would have been a great acquisition for us if we had got him."

With Fowler breaking the 30-goal barrier for Liverpool in three consecutive seasons under Evans between 1994 and 1997, the Reds were regularly in contention for the Premier League title.

Asked if the addition of a player with Batistuta's pedigree could have made the difference for his ambitious young team, the 64-year-old was philosophical in his response.

He added: "We'll never know. When you're the manager you always want other players because you're worried about loss of form and injuries.

"You're always looking to enhance your squad. Maybe it would have done, maybe it wouldn't. We also went in for the likes of Teddy Sheringham at that time.

"Teddy was very interested in coming; he was 29 or 30 at the time. But the club had a policy of not buying older players. As it happened, he went to Manchester United and played for six or seven years there with great success.

"Sometimes you miss out on things. I think he would have brought some good experience to a lot of young lads. We had some experience with John Barnes and Ian Rush, but Teddy Sheringham would have been another experienced player for us.

"You're always looking for players and asking different things. At Liverpool in those days, you did all of your business more or less behind closed doors. None of it was leaked to the press.

"Nowadays, with the 24/7 press it's a lot more difficult for the manager to do it. You enquire about many players.

"When Marcel Desailly was moving, we tried to buy him. The only thing that stopped us was that he wanted to live in London - that was his biggest thing.

"I think he was interested in the football club but it didn't happen. You win some and you lose some."