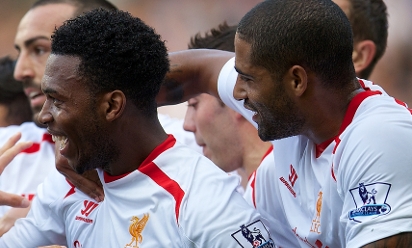 Liverpool made it two wins from two in 2013-14 as they recorded a 1-0 victory over Aston Villa at Villa Park on Saturday evening.

After a dominant opening by the Reds, Daniel Sturridge fired them into a 21st minute lead when he showed great composure in a crowded box to round goalkeeper Brad Guzan and net from close range.

Villa rallied and applied heavy pressure in the second half, but the visitors were able to see out contest and ensure they started the new season by taking maximum points from their first two games, with no goals conceded.

The pre-match team news confirmed an unchanged line up for Liverpool from the team that began against Stoke City in last weekend's season opener. Meanwhile, new loan signing Aly Cissokho was named on the bench.

After last weekend's dramatic victory over the Potters at Anfield, the Reds got the game underway in the Midlands aiming to record wins in their first two matches of a league season since 2008-09.

And the visitors certainly made a positive start to the contest, dominating possession and dictating the play in the early stages, though efforts on goal were proving hard to come by - Coutinho's 15th minute curler over the crossbar the closest the visitors came during the opening.

However, with 21 minutes on the clock, the deadlock was finally - and deservedly - broken by Liverpool.

A well-worked team move resulted in Coutinho expertly dummying to allow the ball to run to Sturridge. The striker showed incredible nimble footwork to dance beyond several challenges before slamming into the roof of the net.

It was the Reds' 100th goal scored under the stewardship of Brendan Rodgers.

The visitors were in complete control by this point, but with four minutes of the half remaining, Simon Mignolet was called into action with the custodian required to produce a full-length save to turn away Christian Benteke's curler.

Moments after, Andreas Weimann's powerful drive from just inside the box was deflected behind for a corner as Villa finally began to assert some pressure before the break.

The hosts continued to press after the re-start, with Leandro Bacuna cannoning a dangerous free-kick into a Liverpool wall before Ashley Westwood drove high over the bar moments after.

Villa continued to look dangerous and Benteke rose highest to nod a corner wide prior to Gabriel Agbonlahor volleying off target after Kolo Toure's headed clearance dropped invitingly for him on the edge of the box.

Next, substitute Aleksandar Tonev drew a low stop from Mignolet from range as the contest entered the decisive stages.

Then, on 86 minutes, Benteke latched onto a bouncing ball into the area and unleashed a powerful effort towards goal - but Liverpool's Belgian 'keeper was able to palm around the post as Villa Park held its breath in expectation of a goal.

However, Liverpool remained resilient and were able to collect a well-earned three points.

Watch LFC take on Manchester United in style with Anfield hospitality starting from just £180 plus VAT. Click here for details.