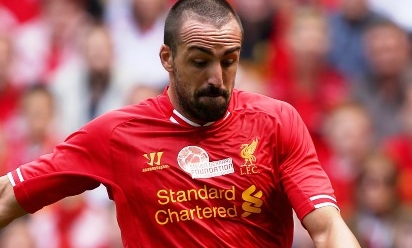 Jose Enrique insists he would welcome the addition of a new left-back to the Liverpool squad.

With young prospect Jack Robinson departing on loan to Blackpool last week, the Spaniard is now the only senior left-back available to Rodgers.

The boss has stated publically that reinforcing the left side of his defence is a possibility before the transfer window closes at the end of August.

Enrique's view is that such competition is necessary in each position if Liverpool are to mount a challenge for the Champions League positions.

"Of course, you need two players in every position," he explained to Liverpoolfc.com.

"If I was injured last year we were playing Glen Johnson on the left. We know Glen, he can play anywhere, but you need two players for any position. He will be more than welcome."

The 27-year-old, who operated in defence and further forward for Rodgers in 2012-13, has been a staunch advocate of the Northern Irishman's preferred style of football since his appointment.

Enrique continued: "The type of football he wants to play takes time to use.

"It's important to have a manager who wants to do something new. He did last year so hopefully this year we'll improve.

"We said last year that hopefully we can fight for the top four. Here in the Premier League it is really difficult; it is the most difficult league in the world. Hopefully we can be there - we will fight until the end."

With Enrique forming part of the backline, the Reds have yet to concede a goal in pre-season, winning each and every one of their five summer fixtures at home and abroad.

"It's good to start with and it's important in pre-season to try to play well," the No.3 said.

"We're doing well at the moment. There are still a few games before the season starts again and hopefully we can continue like this.

"Kolo Toure is a type of player like Carra - an experienced player and talks all the time. It's nice to have a player like that at the back because he is talking all the time and helping you. It's good."

Rodgers and his staff have implemented double training sessions on many days since the squad returned to Melwood at the beginning of July, and Enrique expects beneficial effects.

He concluded: "I think it has been quite hard, to be honest. It is one of the hardest pre-seasons I've ever had, but it has been good. Hopefully that will help in the league games and we can win."