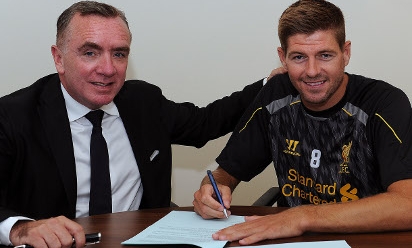 Brendan Rodgers revealed his delight at news Steven Gerrard has signed a contract extension with Liverpool and insisted: 'He's my signing of the summer.'

The Reds captain committed his future to the club by inking the new deal at Melwood on Monday morning - and his manager was eager to express his pleasure at the announcement. 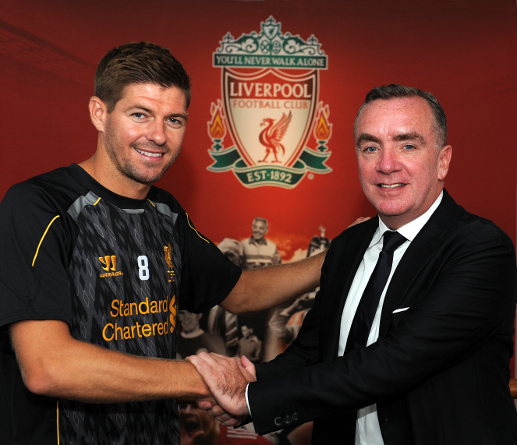 "I've talked throughout pre-season about wanting to bring other players into the group, but this was one of - if not the - most important signings for us.

"He's an icon here at the football club - a real iconic figure for players and supporters. Also, importantly, his contribution at this moment in time is very much valued by myself and the staff.

"I think he's still got a good few years left yet. His level of performance last year was outstanding. He's been a great support for me coming into such a club, a brilliant captain, he's got great values and the leadership he provides is second to none.

"For myself, the supporters and his teammates, it's brilliant news. Now he can really concentrate on his football and hopefully stay at the level he's been at."

Speaking after he put pen to paper on his contract extension, Gerrard was eager to highlight what he describes as a 'perfect' relationship with Rodgers.

The feeling is more than mutual, according to the manager.

Rodgers said: "I respect everything he's done within the game prior to me coming in here. I respect his loyalty and he respects that I am the manager of the football club and make football decisions, but will talk with him.

"I always work closely with players. We have a good relationship and the door is always open for Steven as the club captain.

"He and I speak regularly and our relationship is very, very good, as it is for me with most of the players.

"He's a real good guy and very, very humble. That's the mark of him - with everything he's achieved in the game, everything he's won, he's the current England captain and one of the best players to ever have graced the Premier League, to retain the humility that he has and still the eagerness to want to improve and be better, he is a real shining light and example for many players."