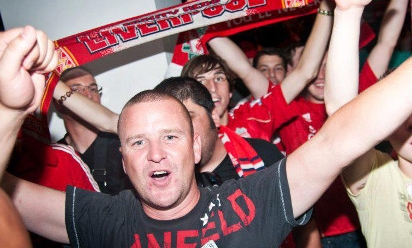 If the reaction coming out of Australia on Twitter was anything to go by, the choice of Melbourne as the host city for Liverpool's first ever game in the country was a popular one.

And it seems no one was more delighted than Anthony Papa, Chairman of the Melbourne Liverpool Supporters' Association.

Established in 2005 and given official status earlier this year, the Melbourne branch will be arranging numerous activities around Liverpool's visit and to gauge just what today's announcement means to fans in Australia's second biggest city, Liverpoolfc.com spoke to Anthony...

Liverpool have announced today that they will visit Australia in July. How excited are you that news is finally official?

I am absolutely delighted! It is difficult to describe, really. Obviously today's announcement is terribly exciting, but I also see it as a wonderful reward for those supporters who follow Liverpool FC so passionately in this part of the world. On a personal level, having supported the club so strongly from a distance for most of my own life, it is amazing to think that the club will actually be visiting these shores on an official pre-season tour. 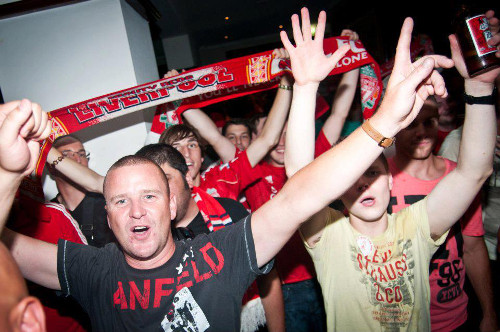 When did you first hear the rumours the Liverpool were possibly going to visit Australia and what was your initial reaction?

I probably first heard whispers that Liverpool were considering a pre-season visit to Australia last December, prior to Christmas. My own initial reaction was not exactly over the top, as we have heard very similar rumours about a possible Liverpool tour of Australia for a number of years now, given the large following the club enjoys in this country. I'm probably not the type of person who gets too excited about rumours and gossip (at least without some sort of tangible evidence!), so it was more a case of 'let's just wait and see what happens' from my own perspective.

However, once stories began cropping up in local newspapers and the general media, these rumours started to grow that bit louder and I began to pay a little more attention to them and the excitement emanated from there. Once some information started to filter through to those of us involved in the local Liverpool Supporters' Club here in Melbourne, it was only then that I started to believe that a tour was a genuine possibility. To now see the tour officially announced, and actually become a reality - is absolutely fantastic.

This will be Liverpool's first ever visit to Australia - what has been the reaction amongst fans who have dreamed of seeing Liverpool play on Australian soil all their lives?

It has been extraordinary. Ever since the news first broke that Liverpool could possibly be on their way to Melbourne, our local supporters' club has been inundated with requests from fans, desperate for any piece of information that may be available. The strong level of interest in Liverpool visiting here has been palpable for months.

Now that the tour has been officially confirmed by the club, there are literally thousands of people who are buzzing with excitement that a club of Liverpool's immense stature will be visiting Australia - and that not only includes those who so passionately support the club itself, but also those people who just enjoy their football in general. It is one thing to support the club you love on television every week from thousands of miles away, but to actually have them play in your own backyard so to speak will be an incredible thrill for so many people.

The game will take place in Melbourne. Being head of the Melbourne Supporters' Association, does that make the visit extra special for you?

It most certainly does! Any Liverpool tour of Australia would have been a wonderful occasion for me, but I feel incredibly fortunate to see the club visit my home city. Having the honour of serving Melbourne's Liverpool FC supporting community in my position, as chairman of the Melbourne Supporters' Club, will no doubt add to the overall experience, and at the same time also fill me with an incredible sense of pride.

What sort of turn out do you expect for the game - will it be a sell-out at the MCG?

Melbournians are renowned for their love of live sport, and usually attend these events in phenomenal numbers. Melbourne is often referred to as 'Australia's sporting capital'. Melbourne hosts a number of international sporting events, including the Australian Formula 1 Grand Prix at Albert Park, the Australian Tennis Open, and the famous Melbourne Cup horse race at Flemington which all capture the interest of the entire nation.

The Melbourne Cricket Ground (MCG) is a giant stadium that can accommodate a large number of people, so given the love for quality sport in this city, along with the incredible level of support which Liverpool FC do enjoy in this country, I would not be at all surprised to see most of the tickets available for the match snapped up (and very quickly!).

For Liverpool fans outside of Australia who maybe don't know the MCG - can you explain just how iconic the venue is?

The Melbourne Cricket Ground (MCG) is the largest sports stadium of its kind in Australia, and also the most famous. The MCG has capacity for over 100,000 spectators and has often been the venue for some of the country's most famous sporting moments. It hosted the Summer Olympic Games in 1956, the Commonwealth Games in 2006, and is the venue for the famous Boxing Day Cricket Test in December each year.

The stadium is also considered the home of Australia's indigenous game, Australian Rules Football, where it usually fills to capacity for its showpiece event, the Australian Football League (AFL) Grand Final, which is usually played in late September (or early October). Football-wise, FIFA World Cup qualifiers, along with international friendlies featuring the Australian national team have also been staged at the stadium. 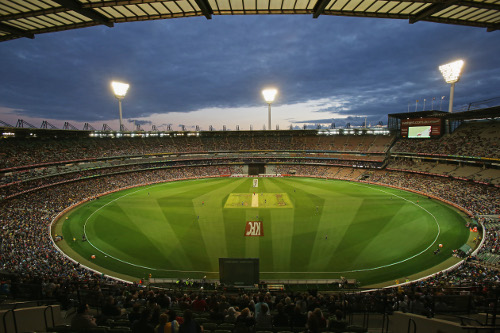 Can you tell us a bit about the Melbourne Liverpool Supporters' Association - when did it start, when did it become official and how many members do you have?

The Melbourne Liverpool Supporters' Association first came into existence in almost the immediate aftermath of that amazing night almost eight years ago now, where Liverpool claimed their fifth European Cup in Istanbul. Prior to that unforgettable occasion on May 25, 2005, a number of passionate Liverpool supporters, including myself, were keen to find a venue in the heart of the city where we could all watch the game amongst like-minded supporters of the club.

The idea was to convince enough people to watch the game at our chosen venue, simply through the use of independent Liverpool FC internet chat forums and simply by word of mouth. Incredibly, some 400-odd people attended the venue that night for the 2005 Champions League final, where we all witnessed what is now considered by many as the greatest moment in our club's history.

The pub literally shook to its foundations, the atmosphere was electric, and the busy city traffic outside the venue came to a standstill due to the sea of red in the nearby streets. We even had a major television station arrive at the pub to report on the celebrations and the bedlam that had ensued! Something big was brewing.

Friendships were quickly formed, and that strong bond with those special people I met that fateful night still exists to this very day. After witnessing the incredible following that Liverpool enjoys here in Melbourne, that same group of supporters decided that our city needed an organised supporters' club - where passionate supporters could regularly frequent, and also meet others with a similar love for Liverpool Football Club.

And so, the Melbourne Liverpool Supporters' Association (MLSA) was established in August, 2005. What started in the beginning as an unofficial fan initiative soon began to grow at an incredible rate, where our club events for bigger matches would often attract in excess of 200 people. In just two short years, our supporters club had become so popular that by May 2007, our organised club meet for the 2007 Champions League final attracted some 750 fans - which surpassed even our wildest expectations.

Buoyed by the response, the MLSA Committee at that time made the decision to actively seek official endorsement from Liverpool FC. This was not only to give our community a familial link with the club, but to also better accommodate the needs of our ever growing supporter base and organisation.

After consistent lobbying over a long period of time, our supporters' club was finally awarded official Liverpool Supporters' Club status on February 18 of this year - which was an incredibly proud moment for everyone who has been a part of this long and winding journey over the past eight years.

How often do you meet up?

Our supporters' club regularly holds club events for our members, where we meet for just about every live televised Liverpool match at our home venue, The Imperial Hotel on Bourke Street, which is situated in the heart of Melbourne's central business district.

Do you have a good relationship with the other official supporters' clubs in Australia and will fans travel from other parts of Australia to attend the game?

Our club have held some discussions with those at the Sydney Supporters' Club - who are also a fantastic bunch of people, that share our passion in providing the best possible environment for their members. We very much look forward to seeing them in Melbourne for the game, where we intend to build on our current friendly relationship, and hopefully work more closely together in future.

There is no doubt that the match will generate interest from all corners of Australia, so we anticipate that many Liverpool supporters from across the country will make the journey down to Melbourne for what should prove to be a wonderful occasion.

Liverpool have a very passionate fan base in Australia - why do you think Liverpool are so popular down under?

It goes without saying that Liverpool FC is clearly one of the most iconic names in world football, who enjoy support just about everywhere. The club's dominance in the 1970s and 80s would have no doubt played its role in winning the minds of football fans in Australia.

As most would be aware, the impact of legendary midfielder Craig Johnston, an Australian, who was a member of those all-conquering Liverpool teams of that era would also have been a major factor. I have met many supporters who often explain that Johnston's famous goal in the 1986 FA Cup final against Everton was the day they first fell in love with the club.

Among our younger supporters in Australia, seeing the likes of Harry Kewell representing the club would also have made Liverpool an attractive club for them to adopt as their own. It is quite incredible to think, that despite Australia's relatively modest football history, there have been two players from this country that have featured in European Cup winning teams for Liverpool - which is unbelievable really.

Finally, for fans who may choose to travel to Melbourne to watch the game, what sort of experience can they expect inside the ground and in the city?

The MCG really is a cauldron of a stadium, so should the attendance reach somewhere close to capacity as we are all expecting, the atmosphere inside the ground should be fantastic. To see so many fans in for the game, with a large amount of those supporting Liverpool on the day, will be a wonderful sight.

Hopefully there will be plenty of noise, as there will be many supporters inside the ground who will be witnessing their first ever live Liverpool match. The city itself will also be buzzing due to the scale of the event, and I'm sure it will capture the imagination of everyone on the day. The pubs and restaurants close by will most likely be covered in a wave of red, so that will be a fantastic thrill for those wanting to get involved in some pre-game activity. We simply cannot wait!