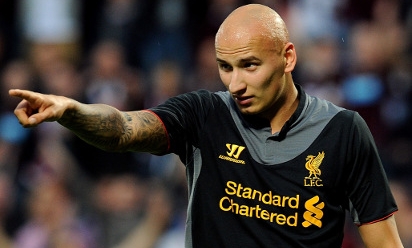 Jonjo Shelvey has been called into the England squad for their forthcoming World Cup 2014 qualifiers against San Marino and Poland.

Shelvey has represented the Three Lions at U16, U17, U19 and U21 level in the past and today Roy Hodgson confirmed the 20-year-old will join Liverpool stars Steven Gerrard and Glen Johnson in the full national squad.

The midfielder was brought into the fold along with Chelsea's Ryan Bertrand and the call-up comes on the back of an impressive start to the 2012-13 Barclays Premier League campaign for the Reds.

First up for England is San Marino on Friday night at Wembley before they make the trip to Warsaw to face Poland next Tuesday. Hodgson's men currently sit second in qualifying Group H, level on points with first-placed Montenegro.