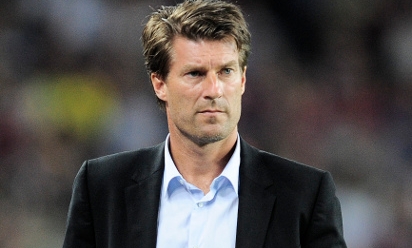 Glen on Gerrard and Balotelli

Michael Laudrup arrived in the Premier League this week after being appointed the new manager of Swansea - but did you know that the Danish icon almost landed on these shores as a Liverpool player 29 years ago?

The playmaker held talks with the Anfield hierarchy in 1983, with Shoot magazine even reporting that the deal had been done.

However, a late disagreement over the contract meant the move did not materialise, and instead he went on to star for clubs like Juventus, Barcelona, Real Madrid and Ajax.

Speaking to Liverpoolfc.com last year, Laudrup explained: "I had the opportunity to sign for Liverpool. We actually agreed a deal and I came over with my father to talk to Liverpool's representatives.

"We agreed a three-year contract and went away thinking it was all done. But two weeks later they came back saying they wanted to offer me the same package, but for four years because I was still young and needed time to develop.

"I was disappointed because although nothing had been signed, we had an agreement. I decided not to join them and people thought I was crazy. This 19-year-old was turning down the great Liverpool. It wasn't really like that though.

"I just felt an agreement is an agreement and people should stick to what they decide. After that, I had other offers and went on to join Juventus. That's football for you."

Peter Robinson performed the duties of a chief executive at Liverpool at the time, and he recently gave his recollection of the transfer talks in the book Joe Fagan: Reluctant Champion.

He said: "Michael turned out to be a wonderful player, but I firmly believe we made the right decision at the time because he was demanding terms and conditions in his contract that were impossible for us to meet.

"The main stumbling block was that he wanted the option to be able to just walk away after a short period if he felt things weren't working out. From our point of view, this just did not make any business sense.

"Over the years it was very rare for a player to turn Liverpool down but it wasn't something we dwelt on. It was just a case of moving on and identifying another target."

Laudrup never got to play at Anfield but he has visited - and judging from his interview with us, he will be excited about the prospect of seeing the Kop again when he brings Swansea to Merseyside next season.

"You know, it is really strange that I had such a long career and played in so many stadiums around the world - but never Anfield," he said.

"I have been there though. I was there for the Champions League match against Barcelona about three years ago. You won 2-1 in the Camp Nou and then lost 1-0 at home.

"It was such an amazing atmosphere that night. I think the word special can be used too often to describe things, but there's no doubt, that is the only word I can think of for Anfield."