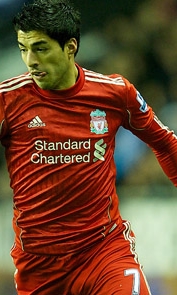 Luis Suarez has apologised for any offence he caused during the Reds' clash with Manchester United.

The Liverpool striker has been banned for eight matches by the FA and began his suspension against Manchester City on Tuesday evening.

Suarez said: "I admitted to the Commission that I said a word in Spanish once, and only once and I told the panel members that I will not use it again on a football pitch in England.

"I never, ever used this word in a derogatory way and if it offends anyone then I want to apologise for that."