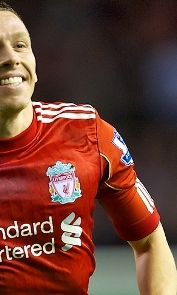 Craig Bellamy is hoping to continue his superb streak of netting against former clubs when Liverpool take on Manchester City at the Etihad Stadium tonight.

The Welshman has scored for Liverpool against former clubs Blackburn, Newcastle and Norwich. He missed the earlier meeting with City at Anfield due to the death of Gary Speed.

Here are the rest of the facts and figures from club statto Ged Rea.

Earlier this season the sides drew 1-1 at Anfield. Vincent Kompany scored on 31 minutes for the visitors with Joleon Lescott deflecting a Charlie Adam shot past Joe Hart two minutes later.

Mario Balotelli came on as a substitute and was sent off 17 minutes later for a second yellow card.

City won this fixture in Manchester last season with Gareth Barry opening the scoring after 13 minutes. Carlos Tevez added two in the second half, one from the penalty spot. It was the Reds heaviest league defeat at City since 1936-37.

The clubs have now met 151 times in the league with Liverpool winning 75.

The Reds  have lost only three of the last 23 league meetings home and away between the sides, and just five of the last 38.

Since the inception of the Premier League, Liverpool have won 13 of the 29 meetings with City winning four.

Home and away the Reds have lost only one of the last 13 clashes - here last season - and have kept eight clean sheets in the process.

Liverpool have never had a player sent off against City in the Premier League.

This fixture in Manchester has produced eight draws in the last 14 league meetings.

Three of the last five clashes in Manchester have produced goalless draws.

That 3-2 win is the only time in the last five visits in which the Reds have scored.

They have netted 15 goals in 14 Premier League visits to City - they have conceded 15.

The Reds have won three of the last 15 visits to City (with four defeats and eight draws), but have lost only two of the last 11.

The last Liverpool man to score a hat-trick against City was Michael Owen in September 2002 at Maine Road. That is the only occasion a Reds player has achieved the feat against City in Manchester.

Kenny Dalglish is the only Liverpool player to score two hat-tricks against City.

Martin Skrtel's first goal for Liverpool came against City at Anfield in November 2009.

A win for Liverpool will see them beat their away points tally for the whole of last season - 18 points in 2010-11 compared to 16 so far in this campaign.

The Reds have lost only one of their last 17 games in all competitions and are unbeaten in the last five.

Tottenham were the last team to score more than once against the Reds in mid-September. Since then they have conceded 10 goals in 17 games with only five coming in the last 11 games.

Liverpool have the meanest defence in the Barclays Premier League this season having conceded 15 goals in 19 games. City have the next best record having let in just 16.

Five of Liverpool's seven league clean sheets this season have come away from home.

Of the 14 games in which Liverpool have scored the first goal this season they have yet to lose and have gone on to win 11.

Jose Enrique could play the 150th game of his English career tonight.

James Milner made his City debut against Liverpool in August 2010 in his side's home victory.

Pablo Zabaleta was sent off playing for City against the Reds at Eastlands in October 2008.

The last City hat-trick against Liverpool was scored at Anfield by Eric Brook in 1937 in his side's 5-0 win.

City's biggest home win over the Reds came in September 1935 when they won 6-0.

City require three more goals to record 200 against Liverpool in all league games.

City have reached the midway point of the season having scored 53 goals. The Premier League record for most in a campaign is held by Chelsea - 103 in 2009-10.

They are the only Premier League team this season not to be trailing at half time in any game. The last time they went in behind at the midway point was last April when they were 3-0 down at Anfield.

They spent Christmas at the summit of the league for the first time since 1929 - that season they finished third, 13 points behind.

After scoring in every league game since mid-April they have not hit the net in the last two games. In fact the goal drought is 216 minutes.

The last time City went three league games in succession without scoring was in March 2008.

Ji Dong-Won's 93rd minute winner for Sunderland last Sunday is the only goal City have conceded in the last four games.

City have won all nine league games at home this season scoring 28 goals and conceding just four. The run in its entirety is 14 wins in succession at Eastlands since Fulham earned a 1-1 draw in February.

They are unbeaten at home in the last 19 league games since Everton won 1-0 in December 2010.

No visiting team has scored more than once at City in the league since Wolves scored three last January - and still lost!

Of City's 28 home league goals scored this season only one has come before the 28th minute with 21 of them coming after half time.

If they lose this game it will be the first time since October 2010 they have been beaten in two league games in a row (then beaten by Arsenal and Wolves).

Andre Marriner takes charge of Liverpool for the second time this season - the October Anfield draw with Manchester United being the other. This will be the first time he has handled a City game this campaign.

Scorers this season: (League in brackets)