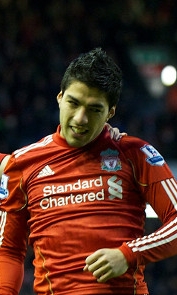 Charlie Adam admits he was delighted to see Luis Suarez return to the scoresheet and help Liverpool return to winning ways with a 1-0 success over Queens Park Rangers on Saturday.

The Uruguay striker headed home the only goal of the game - his eighth of the season - early in the second half at Anfield to help the Reds collect three points and move up to sixth in the Barclays Premier League table.

Suarez had Adam - who was celebrating his 26th birthday - to thank for providing the assist, and the midfielder admits he was pleased the No.7 was on the mark for the first time since his Carling Cup brace at Stoke City.

He told Liverpoolfc.tv: "It was good to see Luis on the scoresheet because the chances have been coming for him, but he's just not been able to get them into the back of the net.

"But like all top strikers, they always wait for their time, and Luis was the match winner.

"I'm delighted for him because he works ever so hard for the team - and his hard work paid off with another great goal.

"It's nice to get an assist, although maybe it was a bit of a swinger with the right-foot cross!

"It was a good way to win the match and it was important because we dominated throughout and we were delighted with the way we played."

Suarez's goal was just rewards for Liverpool, who dominated the contest throughout.

Kenny Dalglish's side tallied up 25 efforts on goal over the course of the afternoon, compared to QPR's seven, and could have won by a greater margin had it not been for the heroics of Radek Cerny between the sticks for the visitors.

Adam said: "We would have been disappointed if we hadn't won the game because we had a lot of chances, but in the end 1-0 was enough and we're happy with that.

Click play to watch our post-match chat with Charlie Adam

"I thought we played well from the start until the end. When it's 1-0 the opposition always have a chance of getting back into the game, but we defended well and kept a clean sheet, which is good. It was a good way to bounce back from the other night (at Fulham).

"The goalie played well, but we won't be disrespectful and say it could have been more. 1-0 was enough in the end and we're happy with the win."

Though the final scoreline did not tell the whole story of what proved to be a largely one-sided affair, Adam insists nobody within the camp will be concerned by Liverpool managing just the solitary goal.

Indeed, the No.26 insists the Reds will happily settle for a 1-0 scoreline in their favour in each and every game providing they maintain their high-level of performance - continuing against Aston Villa at Villa Park next weekend.

"We just want to take each game as it comes and if it's 1-0 every game for the next few weeks, we'll take that and be happy with it," he said. "The most important thing is the performance. We're playing well and we'll move on to next week against Aston Villa.

"It was a big win for them against Bolton (on Saturday) and Villa Park is always a tough place to go. They've got a good manager and good players, so it will be difficult but we're ready for them."

Adam added: "We were 11 games unbeaten before Monday night and this was a good way to bounce back. Going to Villa Park will be difficult, but we'll be ready for the challenge and hopefully come away with another three points."