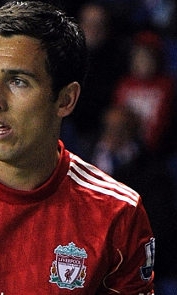 Steven Gerrard believes Stewart Downing's summer move to Liverpool will see him blossom into one of the finest players in the Barclays Premier League.

The winger has yet to get on the scoresheet for the Reds but put in a superb show in England's friendly success over Sweden last night.

Gerrard reckons Kenny Dalglish swooped for the former Villa man at just the right time and is hopeful he will go on to prosper in the years ahead.

"I think the move was perfect for him at this point of his career," Gerrard told LFC Magazine.

"He was the star at Middlesbrough and I think he moved up to Villa and proved he could be one of the best players in the league. He was their player of the year last year.

"I think at the age he's at it was perfect for him to sign for us. I felt he was a player we needed and that we were a club he needed to be at.

"He now has a platform here to prove over the next five or six years that he's one of the best players in the league. He can really nail down that left-side role and make it his own."