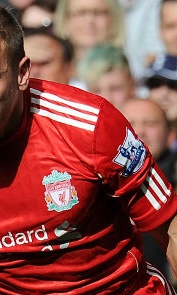 Kevin Keen today paid tribute to the impact Craig Bellamy has made both on and off the field since re-signing for Liverpool – and predicted a career in management for the striker when he hangs up his boots.

The Wales international put pen to paper on a two-year deal with the Reds on August's transfer deadline day to seal a return to the club he left in 2007.

Bellamy has since supplied Kenny Dalglish's side with two goals and a string of eye-catching performances in eight appearances so far.

However, according to Keen, the 32-year-old's influence stretches beyond on the pitch matters, revealing how the No.39 is also making good use of his experience on the Melwood training pitches.

And the first-team coach believes Bellamy has the right attributes to make a manager once his playing days are over.

"I think he has been a really good addition for us," Keen told Liverpoolfc.tv. "He is really good around the training ground. He's not scared to dig people out if they're not doing things properly.

"He and Carra are similar in that respects - if people are not taking the training right, it might be that I'm about to tell them to change, but they'll step in as senior players and say, 'Come on, you can do better than that' which is really refreshing. It's nice to have those sort of people around.

"He gives us a different dimension on the pitch, whether he's starting the game or coming off the bench. He can play either side, up front or in the hole. He gives a bit of athleticism to our side with his pace. It's good to have him.

"He's a good lad. What some people don't know is about how he puts thousands and thousands of pounds into soccer schools in Africa and all of the good work he does around the place.

"I like him, he is a fantastic professional. I think in the future - certainly not soon but in maybe five or so years - you could be interviewing him as a manager somewhere in England or Wales."

Keen was already well versed in Bellamy's talents having worked with the front man for a year and a half at West Ham United.

And Dalglish was keen to gain an insight into his character before finalising the deal.

"Kenny spoke to Steve (Clarke) and I because we worked with him at West Ham," confirmed Keen.

"He is a fantastic professional, he wants everything done right, he works extremely hard in training and to keep himself fit."