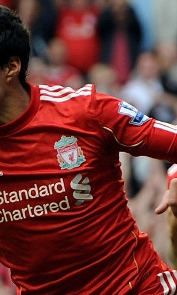 Scots fancy Jonjo but no Coates

The impact made by Luis Suarez since his arrival at Anfield at the start of 2011 has been beyond the wildest dreams of every Liverpool supporter.

The dynamic Uruguayan has been twisting, turning, exciting fans and scoring goals since he made his debut for Nacional as an 18-year-old in 2005 and has since gone on to star for Groningen and Ajax in Holland.

His performances for club and country made him one of the hottest properties in Europe and he earned a dream move to Liverpool, where he has become an instant hero.

The Suarez Story is an 84-page official special edition celebrating the career of one of the world's most skilful players, focusing on each stage of his dazzling career.

This £4.99 glossy magazine includes an exclusive interview with the man voted the Copa America's best player, plus tributes from Anfield stars, superb pictures and features on his best goals and games.