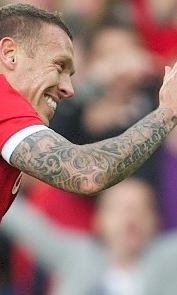 Craig Bellamy finished superbly to get his name on the scoresheet for Wales during a 4-1 friendly win over Norway on Saturday.

Our summer signing bent home from the edge of the area after 16 minutes of play in Cardiff.

Sam Vokes (two) and Gareth Bale were the other scorers for Wales.

Over at Wembley, Glen Johnson played 90 minutes and Stewart Downing came on for the second half as the Three Lions beat World Cup winners Spain 1-0.

Pepe Reina also came off the bench to play the second period for the visitors.