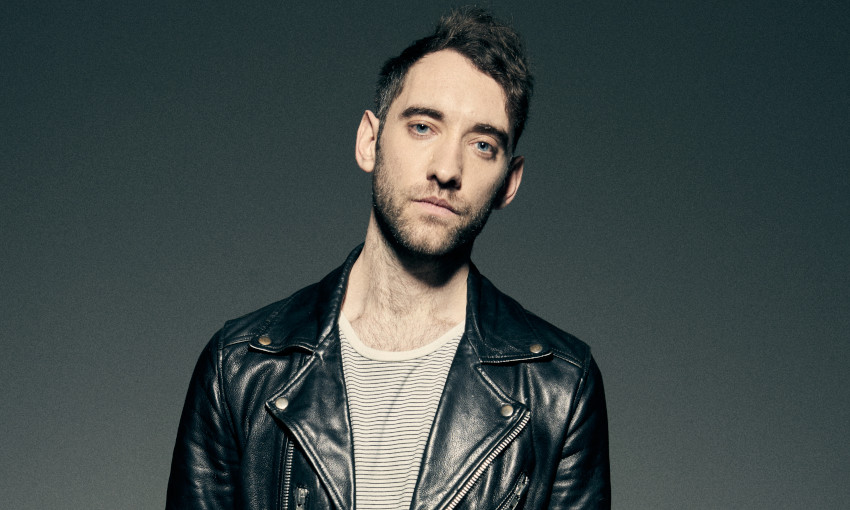 Liverpudlian artist Michael Joseph Nelson – who performs under the name Banners – has kicked off our new series of guest music playlists.

Nelson, whose debut album Where the Shadow Ends was released in October 2019, comes from a family of lifelong Reds and a thread of local tunes runs through his selection of songs for Liverpoolfc.com.

“I wanted to have a load of Liverpool music in there so I thought I’d make a home and an away team,” he explained. “The home team is obviously all Liverpool bands and the away team is music from everywhere else that I really love!

“Which Beatles song to pick was a bit of a tough one but I went with She Loves You because the Kop are singing it in that Panorama documentary from the ‘60s. They’re singing Cilla Black too but she didn’t make the cut on my playlist. Sorry Cilla.

“Before I play gigs I have an entirely Liverpool bands playlist. It’s boss playing in North America and getting the crowds to listen to Scouse music.

“I also come on stage to Heart As Big As Liverpool by Pete Wylie and the Mighty Wah so I’ve got that on there too. (If Pete is reading this, I hope that’s alright with you, mate.) Up the Reds.”

Listen to Banners’ playlist on Liverpool FC Spotify below – and scroll down for our interview with Nelson on all things LFC, Liverpool and music…

How did you become a Liverpool fan?

My family have supported the Reds for generations so there wasn’t a choice really. The first game I went to was in 1994, I don’t remember loads from it other than Robbie Fowler getting the ball on the touchline. Me and my dad were in the Centenary Stand, now the Sir Kenny Dalglish Stand, on about the halfway line. The bit that I do remember really, really vividly was walking up the concourse steps. Seeing the night sky lit up by floodlights, then the lights on the top of the old Main Stand, then the crowd, then the greenest, most beautiful pitch. Like it was glowing. There’s no going back then, is there?

My grandad has been going with the same group of mates since the FA Cup final in 1965 and they’ve been meeting up at the same pub the whole time. So I’ll pick up my dad and my brother and meet up with the rest of my family at the King Charles pub off Oakfield Road. I’ll put my pound in and pick the first goalscorer out of the hat. My grandad runs this and is absolutely rubbish at spelling players’ names. Coutinho used to be spelled “Cortina”, for example. I’m excited to see how he gets on with Tsimikas. I don’t know if you can have a word but it’d do us all a favour if he can go by “Kostas” for the season. I like getting into the ground for the warm-ups. Everyone’s season ticket is row 11 of the Kop just behind the goal so I’ll watch shooting practice from there and leg up to the back where my ticket is, in block 306, for kick-off. Kiss my scarf for luck and then sing my little heart out.

What is your favourite Liverpool memory?

So hard to pick one! Actually it’s probably not a matchday one. For the 20th anniversary of Hillsborough there was a charity version of The Fields of Anfield Road recorded. My dad produced it and I helped out with some engineering, and did some singing. I’m doing the harmonies in there. During the anniversary service at Anfield it got played to the 33,000 people that were there and then it got a big round of applause. Just to have had a small part in a thing that’s so important to us all, that was playing at Anfield and then applauded by the crowd, is something I’ll never forget. Oh and when Dudek saved Shevchenko’s penalty!

What is your favourite Liverpool chant or song?

I’ve always really loved singing “Oh come let us adore them” at Christmas. Of the more recent ones the Van Dijk/Pogues one is boss and I love the “La, la, la, Liverpool, Liverpool” to the tune of Solsbury Hill by Peter Gabriel. We’re lucky to have such inventive fans, aren’t we? So many boss songs!

Who is your favourite Liverpool player?

I genuinely love them all so it’s a bit like choosing a favourite child, but I think it’s Bobby Firmino you know. I don’t think it gets better than having a Brazilian No.9, especially one that plays like he does. What a fella. I also love Henderson and I’m so happy for him. I think he’s such an inspirational captain. I used to love Robbie Fowler and McManaman when I was a kid. Then Michael Owen (I know, I know) and Stevie Gerrard. My grandad would like me to mention Billy Liddell at this point, who was apparently better than all of them put together.

What’s your favourite thing about Liverpool as a city?

That it’s so welcoming to outsiders. That it’s a port city so it’s made up of a huge mix of cultures that make it totally unique. That it’s a little republic out on its own. Scouse not English! And that wherever you go in the world people know it because of the footy and music. We’re so lucky to have a football team that represents our city so well, and a manager and players that understand how important it is to be good ambassadors for the city.

What are your predictions for the new season?

I think it’s gonna be brilliant. I think the players are going to want to win the league in front of supporters and I think that’s going to drive them on. I’d expect other teams to strengthen but I think that there’s areas that Liverpool are gonna get better too. As crazy as that sounds! I trust our manager so much that I’m dead excited to see what he, Pep Lijnders and Peter Krawietz come up with over the summer. I think Tsimikas looks a really good signing and I’m dead, dead excited about seeing more of Curtis Jones, Neco Williams and Harvey Elliott.

If you had to pick one – football or music?