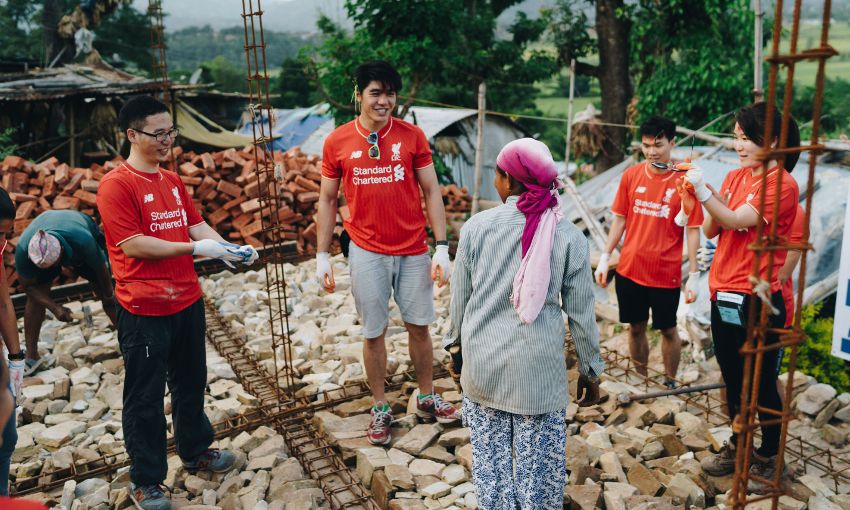 A 42-strong volunteer group from Standard Chartered travelled to Nepal last month to provide support to a project rebuilding houses in a village ruined by last year's earthquake.

The south Asian country was struck by disaster on the morning of April 25, 2015.

An earthquake of 7.8 magnitude, which was followed by another 17 days later, plunged Nepal into crisis, instantly making millions of citizens homeless, claiming the lives of almost 9,000 people and destroying the nation’s infrastructure.

Aid soon arrived from around the world to help with the immediate response, though the sheer scale of the damage means – 18 months on – a huge amount of work must still be done.

Inspired to help, the team of 42 Standard Chartered employees, all alumni of the bank’s graduate programme, used three days of annual volunteer leave provided by the bank – main sponsor of Liverpool FC – to travel to Nepal in mid-October after more than a year’s worth of planning and preparation for the trip, which had to be rescheduled on two previous occasions.

Sponsored by Habitat for Humanity, a global non-profit housing organisation, the volunteers’ destination was Pipaltar, a small central town that was devastated by the impact of the earthquake.

Of the 93 homes in the village, 87 were destroyed, leaving little to no shelter for its population.

The party landed in Kathmandu, the capital of Nepal, before driving across the rocky mountain terrain via Kavre to Pipaltar, where their work would be undertaken during a three-day stay.

The task at hand was to build the foundations of new houses which could bring much-needed stability to the community – involving a range of duties, from manually laying bricks to mixing cement by hand to carrying supplies from distance to the site, alongside local helpers.

A world away from their usual jobs it may have been, but the volunteers’ tireless efforts and commitment meant that by the halfway stage they had already completed the work allotted to them.

On they continued, however, and at the conclusion of their third and final day in Pipaltar, the building blocks of eight new homes, and thereby the futures of the families who will occupy them, had been put down.

The team also visited the local school to donate crucial educational supplies such as notebooks, pens and markers – plus LFC footballs.

That the volunteers conducted the project while sporting Liverpool shirts proved timely too, as the trip coincided with the annual 15-day Dashain festival – with which the colour red is strongly associated.

As part of the celebrations and in appreciation of the work being done, the villagers in Pipaltar bestowed the tika blessing on their visitors, with the vivid splash of red dye on the forehead intended to bring good health and fortune to those who wear it.

Acknowledgement of the team’s dedication also came during a special breakfast with the CEO of Standard Chartered Nepal, Joseph Silvanus, before their departure.

But that will not be the end of the story.

As well as a ‘100 per cent’ commitment to repeating the venture, future trips to Nepal and other areas in need could become more frequent and of a longer duration, with all involved eager to continue an initiative that has the potential to change lives.